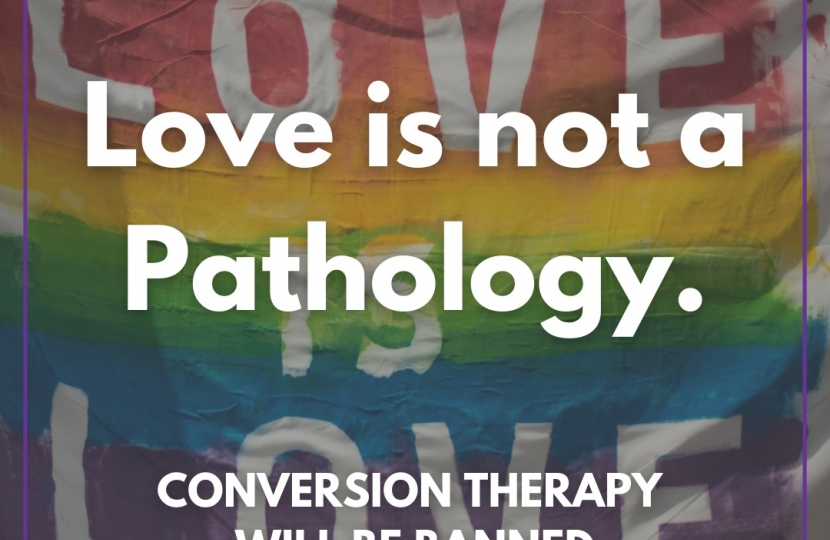 Right now, over a million people in this country are still being told their sexual identity is a choice and that it can be cured. That is completely and utterly wrong. Sexual orientation is not a pathology, and most definitely should not be treated as one. Since my election I've been leading the campaign in Parliament to secure a ban on the fraudulent and abusive practice of LGBTQ+ so-called Conversion Therapy. I'm delighted the Government has announced in the Queen's Speech that a ban will be brought forward.

Legislation to make so-called LGBTQ+ Conversion Therapy an offence is needed, in order to:

Like Female Genital Mutilation, we need specific legislation, rather than relying on existing GBH laws not just to send a clear message, but crucially to enable us to ban its advertising, create protection orders, secure prosecutions for non-violent practices and provide financial support to victims.

Love is not a pathology, and it doesn’t need treating. Today’s proposals will protect LGBTQ+ people from bigotry and quackery packaged up by sinister charlatans to snare and profit off the vulnerable. I will examine the proposals in detail, but the proposed ban, protection orders and support for victims for which I’ve campaigned so long, are serious, meaningful and will save lives whist protecting freedom of religion.

I applaud the Government for these robust proposals and encourage everyone to respond to the consultation. I remain unconvinced that anyone can consent to such an abusive practice, and will look closely at the proposed ban to ensure that victims and survivors get the protections they need and deserve. I will also look at the common law definition of coercion to ensure it adequately supports victims of conversion therapy, and will also consider whether legislation should be extended to under 25s if the Government intends to allow adults to "consent" to this fraudulent and abusive practice.

As Conservatives, our calling card must be the defence of individual freedoms. Surely, we must all believe that it is better when individuals have as much liberty to define for themselves their own happiness, so long as it is done within the bounds of a stable, law-abiding society?

LGBTQ+ so called conversion therapy is utterly incompatible with that vision, which is why I have campaigned to end it.

I want to take a look at some of the arguments being made against this Bill, and hopefully demonstrate why ultimately what we all need is to take the heat out of this discussion, get the facts right, and a good shot of empathy on all sides...  [Read more}

“The Queen’s speech today sends a very powerful message: love is not a pathology, and it does not need treating. LGBTQ+ so-called Conversion Therapy is little more than bigotry and quackery packaged up by sinister charlatans to snare and profit off the vulnerable.

“Since my election I’ve worked tirelessly to secure this ban, which is a tribute to the survivors of conversion therapy, to those whose lives were lost too soon because of this abhorrent abuse, and to all those hurting or made ashamed for being who they are.

“This ban will see our Government ensure that LGBTQ+ people have the liberty to live their lives free from identity-based violence and abuse.”

'Whatever our convictions, it is right that we should all be held to the highest standards of personal care and respect, and I welcome this announcement as an opportunity for co-operation and learning how to secure these standards and protect the vulnerable.'

Since her election in December 2019, MP for Rutland and Melton Alicia has led the campaign in Parliament to ban this practice, worked with campaigners such as Stephen Fry, former Archbishop of Canterbury the Rt. Revd. Dr Rowan Williams, the Coalition for the MOU against Conversion Therapy, the Ozanne Foundation, Stonewall, the Royal College of Psychotherapists, the Albany Trust, GLADD, Mermaids, the Inter-Religious Advisory Board of the Ozanne Foundation, and a number of further University and charity partners.

Ahead of the Queen's Speech I set out my hope that a Conversion Therapy ban will be announced: https://attitude.co.uk/article/gay-conversion-therapy-is-inherently-abusive-banning-it-is-long-overdue-1/24956/

This month I arranged, and took part in, a number of events with MPs, mental health practitioners and more to discuss why a ban is needed.

My contribution can be found here: https://youtu.be/qfw6-gIlyiU Thank you to the Albany Trust, MOU Coalition, and the Royal College of Psychiatrists.

Working with the BACP, UKCP, BPC, BPS, RCPsych & the wider MOU Coalition I held a discussion with Dr Ranj Singh on the impact of a Conversion Therapy.ban on mental health and wider health professionals.

It was a privilege to meet with organisations against Conversion Therapy and survivors of this abhorrent practice to discuss next steps to secure legislation.

BBC Radio 4 published an important report on Conversion Therapy which I was pleased to contribute to: https://www.bbc.co.uk/programmes/m000sz1y

I'm pleased that the public petition to ban Conversion Therapy was debated in Parliament this month,. My speech in full is here: https://www.youtube.com/watch?v=H2VORXT9o_s

Submitted written question regarding reviews of legislative bans from other countries.

I advocated at a side event to the UN’s 65th Commission on the Status of Women that women must push for a ban on Conversion Therapy in all our countries. The event was entitled “Women Leaders as Advocates for Equality and Inclusion of LGBTI+ Persons".

It was a pleasure to meet again with the organisations who have been fighting for so long to secure a ban on Conversion Therapy to discuss next steps to secure legislation.

To mark LGBTQ+ History Month I wrote this article to fellow MPs urging a ban on Conversion Therapy.
https://www.politicshome.com/thehouse/article/we-must-criminalise-abhorrent-practice-of-lgbtq-conversion-therapy

I wrote again this month to the Prime Minister urging for the ban on Conversion Therapy to be brought forward urgently.

I met with LGBTQ+ survivors and advocacy groups to discuss how to engage with MPs and Peers on a ban on conversion therapy.

Submitted a written question regarding which countries the UK Government is supporting efforts to end LGBTQ+ conversion therapy.

I met with LGBTQ+ survivors and advocacy groups to discuss progress on the campaign.

To deliver a ban on conversion therapy there needs to be an agreed legal definition of what the practice entails that can be used as a basis for legislation. I have this month delivered a draft definition to Government for consideration as they progress legislation, for which I've secured the backing of survivors, 15 major LGBTQ+ advocacy groups and 10 religious representatives who represent all major faiths in our country.

The proposed definition of Conversion Therapy is:

Update September 2020: Pressed the Equalities Secretary for an Update on Legislation

Today I pressed the Equalities Secretary to provide a timeline on legislation and an update on progress to deliver it. https://www.youtube.com/watch?v=xdg2_Yo-EQU

News September 2020: Secured the Support of the Health Secretary

Today I raised Conversion Therapy with the Health Secretary and am delighted to have secured his support for a ban. https://www.youtube.com/watch?v=7cdGefFacH4

Arranged a meeting for MPs with Trans survivors of Conversion Therapy.

As part of my campaign I wrote this month in Attitude Magazine about why I'm determined to deliver a ban on Conversion Therapy.
https://attitude.co.uk/article/gay-conversion-therapy-is-fraudulent-and-abusive-its-time-to-ban-it-for-good/23510/

I raised with the Prime Minister the importance of banning LGBTQ+ Conversion Therapy and was pleased to receive his support for banning what he called an abhorrent practice.

I met with LGBTQ+ survivors and advocacy groups to discuss progress on the campaign.

I believe that legislation and activities in England and Wales should specifically enable:

December 2019: Elected and Come to Parliament Committed to Deliver a Ban on LGBTQ+ Conversion Therapy

The ban on so-called conversion therapy is targeted at fraudsters and charlatans — those so divorced from decency and compassion, and so hellbent on the rightness of their world views that their brand of torture frequently drives their victims to depression, severe mental suffering and suicide.

Let's Interrogate the attacks on the Conversion Therapy Ban

As Conservatives, our calling card must be the defence of individual freedoms. Surely, we must all believe that it is better when individuals have as much liberty to define for themselves their own happiness, so long as it is done within the bounds of a stable, law-abiding society?