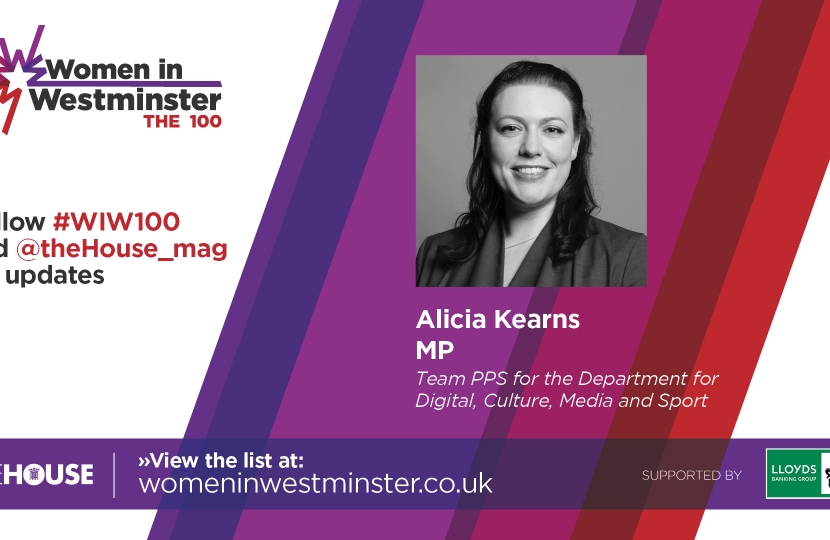 On International Women’s Day Alicia Kearns, MP for Rutland and Melton, has been recognised as one of the top 100 Women In Westminster.

She is the only member of the 2019 intake of MPs to be awarded this honour, which recognises her contribution in Westminster since her election.

The award is one of the most prestigious in Westminster, and in its second year recognises 100 women politicians, leading civil servants, journalists, think-tank leaders and beyond for being leaders in Westminster.

From Women in Westminster: The 100

“Most politicians take years to achieve what Alicia Kearns has accomplished in just twelve months. Elected as the second ever woman MP for Rutland and Melton in December 2019, Kearns has a remarkable talent for multi-tasking problems on multiple fronts.

“Despite working remotely for much of the year, Kearns fought for new rules ensuring no woman has to give birth alone during the pandemic. Her efforts secured prioritisation of COVID-19 rapid tests in maternity settings and an exemption for under 5-year-olds from national lockdown restrictions. A fierce advocate for the Uyghur in China, Kearns swiftly obtained an inquiry into the crisis in Xinjiang by the Foreign Affairs Committee. In her constituency, she persuaded the Prime Minister to back her campaign for a new GP practice in Melton. Kearns is also serving in a junior role at the DCMS.

“No stranger to crisis management, prior to election, Kearns worked as a civil servant at the Ministry of Defence and the Foreign Office and was involved in the response to the Salisbury attacks and the counter-terrorism communication campaigns in Syria and Iraq. Hailed in the media as the ‘politician of the year(), Kearns is taking a few months off after the birth of her second child, after which she plans to get straight back into the fray.”

This follows her being named 2020 MP of the Year by Sky News Political Anchor Sophy Ridge.

Alicia Kearns Writes for the Daily Express: Sino-British Relations – Britain must stand up to Beijing

Sino-British Relations - Britain must stand up to Beijing