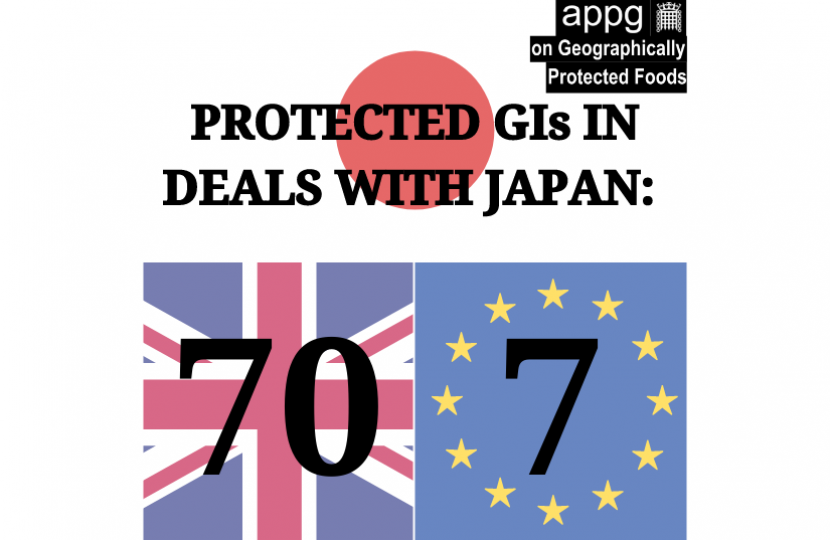 Rutland and Melton MP and Chair of the All Party Parliamentary Group on Geographically Protected Foods, Alicia Kearns, has welcomed the ambitious protections for geographically protected foods (otherwise known as GIs, contained in the UK-Japan Comprehensive Economic Partnership Agreement.

The UK Government was able to go much further than the EU-Japan Agreement, by extending the number of GIs recognised from just seven to potentially over 70. This includes some of the best produce in the world, Melton Mowbray pork pies, Stilton cheese, Rutland Bitter, Malt whiskey, English sparkling wine, Yorkshire Wensleydale and Welsh lamb.

GI beef, pork and salmon producers are also set to benefit from significant tariff reductions included in the deal and every part of the United Kingdom will benefit. Scottish wild and farmed salmon, West Wales salmon, Scotch beef, Welsh beef, and Gloucestershire Old Spot pork will see tariffs fall, expanding on the low tariff schedules in the EU-UK agreement.

“This deal is a brilliant first step in recognising the contributions of our amazing food producers and opening markets for our phenomenal food and drink products. GIs boost local economies and fly the flag for our nation’s culinary heritage abroad. I am very glad that their importance has been recognised by both the UK and Japan in these intense negotiations.

“Rutland and Melton is home to three great GIs, Melton Mowbray pork pies, Stilton cheese, and Rutland Bitter. I am also very glad that this deal represents the first step to hopefully joining the CPTPP, which will open up an even bigger markets for Rutland and Melton’s GI producers.

“This deal will boost British trade by £15 billion and help our food producers access new markets. This really does represent a new chapter for our country.”

The UK-Japan agreement builds on the already £430 million worth of food and drink exports to Japan every year, and all the measures included in the deal will mean that there are no tariffs on 99 percent of exports to Japan, and will boost workers’ wages in the UK by £800 million.