Chemical Weapons Use In Douma Must Result In Real, Meaningful Action Against Assad 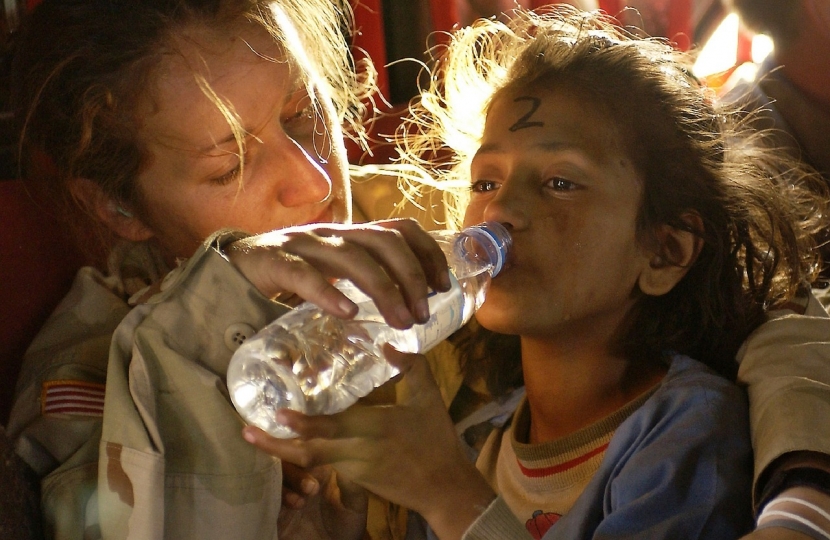 The Huffington Post asked me to write on the situation facing Syria following the chemical weapons attack in Douma.

In 2013 our Parliament failed to pass a vote for action against Assad to prevent further chemical weapons use - that act shames us today.

It is five years since President of Syria, Bashar al-Assad, promised to abandon all stockpiles of chemical weapons. It is five years since Russia, its guarantor and backer, committed to ensuring this disposal took place. Since then, we have seen the use of chlorine gas, mustard gas, sarin gas, agent 15, and phosphorus bombs against opponents of the Assad regime. This has been confirmed by the United Nations and the Organisation for the Prohibition of Chemical Weapons (OPCW). With these weapons, not to mention the ongoing use of barrel bombs and conventional weapons, Assad has relentlessly pursued his scorched-earth policy to eradicate any opposition to his leadership. This includes seven targeted hospital attacks just two months ago, and bombardments where almost 200 people, many of them children, were killed in under 40 hours. This weekend: Douma, a suburb of Damascus, became the latest face of the Syria crisis, as a chemical weapons attack murdered 40 Syrians, again many of them children.

It is also five years since our Parliament failed to pass a vote for action against Assad to prevent further chemical weapons use, and that act shames us today. On that day many MPs cheered at the outcome, those cheers echo in my mind as I have watched, for the five years since, the slaughter of men, women and children every day by gruesome and mainly illegal means.

In 2013, we knew of the atrocities and we should have acted. The Iraq War rightly changed the quality of debate that takes place around military intervention, particularly in the Middle East. It also changed how our approach to intelligence analysis. Discretion often is the better part of valour, but this must not render us wholly unwilling to defend those who so desperately need our help. I stand clear in my view that intervening to stop regimes from committing genocide is the right thing to do.

We should have voted yes to military action, with the explicit aim of grounding Assad’s air force, and indeed all aircraft in central and western Syria. Had the vote passed, I would have advocated for a no-fly zone: a crucial deterrent to Assad aircraft carrying barrel bombs, chlorine gas and other illegal weapons. If need be, the UK should have stood ready to shoot these aircraft down. Around the time of the vote, footage surfaced from inside of one of Assad’s helicopters: regime soldiers sat in the back, casually smoking and chatting as they kicked barrel bombs out of the aircraft onto the inhabitants below. The result? Indiscriminate civilian atrocities.

Grounding Assad’s air force would have curbed the genocide which has been grimly delivered predominantly from the sky – killing hundreds of thousands. Crucially, UK soldiers would not have been required on the ground, nor British aircraft in Syrian skies. British cruise missiles based in neighbouring countries such as Lebanon, Jordan and Turkey would be enough to enforce the no-fly zone. This is a far cry from the disingenuous ‘bomb first, talk later’ mischaracterisation which continues to be uncritically propagated – and which does a great disservice to the diligence of the men and women in our Armed Forces. A successful vote would also have laid the groundwork for UN-led peace talks with some opportunity for positive outcomes. With an end (or pause) to the vast majority of the killing, a focus on justice, reconciliation, and meaningful political representation could have taken place.

In 2013 we had the chance: but in an attempt to avoid the past vice of belligerence, we blundered instead though intransigence. Two years later, as we stood passive in the face of genocide, our chance for redemption was diminished further: in 2015 Russia intervened in Syria. Following Russia’s engagement our ability to take action was stunted, if not made impossible. This is because we will not, and should not, be drawn into military conflict with Russia. The official Kremlin line is that Russia entered Syria to help defeat the terrorist group Daesh, but the reality was far more self-serving. Propping up their favourite, Assad, has paid many important dividends. Intervention enabled Russia to secure for itself the defining place on the world stage that Putin so desperately desired, to stand equal to the United States at the UN-led Syria peace talks in Geneva. Crucially in the Middle East, this allowed Russia to consolidate its position as a mediator with and for Iran, and embed itself within the Middle East by establishing military bases inside Syria – possibly shaping the future of the whole region for decades to come. If that Russian vision is to keep Assad in power as their puppet, then the genocide continues.

In 2013 we had the chance: but in an attempt to avoid the past vice of belligerence, we blundered instead though intransigence.

So what options do we have now to limit further atrocities, and help end the crisis? Indeed should we doing anything at all? It remains absolutely right that we help to end the genocide of a people by its tyrannical leader, but we are hamstrung by Russia’s intervention and the UN’s sclerotic progress at the peace talks. Is it feasible for the UK to intervene militarily at this stage? Last year Trump ordered a US cruise missile strike on a Syrian airfield from which the KS chemical weapons attack was believed to have been staged. Russia and Assad took little action in response, suggesting some targeted intervention (when clearly justified) would be effective. This could serve to galvanise Assad’s allegiance to Moscow – but could provide desperate respite for his people.

We should still work to secure the leverage needed for Russia to ensure Assad meets his international commitments. Be in no doubt, Russia has the power to force Assad to curtail its atrocities and come willingly to participate meaningfully in peace talks. We could consider action that targets Assad’s chemical weapons factories, deploy cyber-measures against his war infrastructure, and seek to drive a wedge diplomatically between Iran, Russia and Assad. The goal would then be an agreement to UN-managed elections, in which Assad could still stand, but crucially for the first time: genuine opposition leaders would be on the ballot.

A note on conspiracy theories: since the chemical weapons attack on Saturday social media has been flooded with conspiracy theories that the attack was staged, a trick to trap President Trump in to keeping troops in Syria, or an act perpetrated by jihadists because Assad has no reason to carry out such a horrific attack so close to ‘winning’ in Syria. These narratives are not only misguided, but an insult to all the men, women and children murdered in the attack. To counter these outright: Trump’s troops are fighting Daesh, not Assad; and the chemical weapon attack is not an isolated incident. The truth is that this crime is yet another deployment of illegal weapons and chemical weapons to achieve Assad’s goal – the eradication of any opposition, and the punishment of individuals and communities who supported them; and convincing all other peoples that all resistance to him is hopeless. This attack is a continuation of abhorrent behaviours that have been unfettered due to the protections afforded to Assad by Russia. These crimes are being obfuscated and appeased by the usual equivocating statements by certain UK politicians, failing to hold Assad to account – and perverting any hope that may still flicker for the people of Syria.

So what happens next? An OPCW investigation will now take place, hopefully unobstructed by Russia. The UK, along with its allies, has called for an emergency meeting of the UN Security Council in New York today. These sessions make little impact, in early March the UN Security Council called for a ceasefire but in Eastern Ghouta: the Regime, with permanent Council member Russia’s support, continued to bombard and besiege the population in a continuation of its siege and starve war tactics. This demonstrates a contempt, and total disregard for international process and agreements. This pattern of misery is likely to be repeated, unless member states choose to take a stand outside the Security Council session – but since 2015 this has been much riskier and the stakes may well be too high.

I desperately hope that this attack, this mass murder, results in real and meaningful action being taken against the Assad regime and its backers, in order to end the crisis and allow the Syrian people to know peace. It begins at home, will our politicians speak up against tyranny and genocide? Or will the suffering our inaction compounded continue, with Syrian civilians the ones paying the ultimate price?