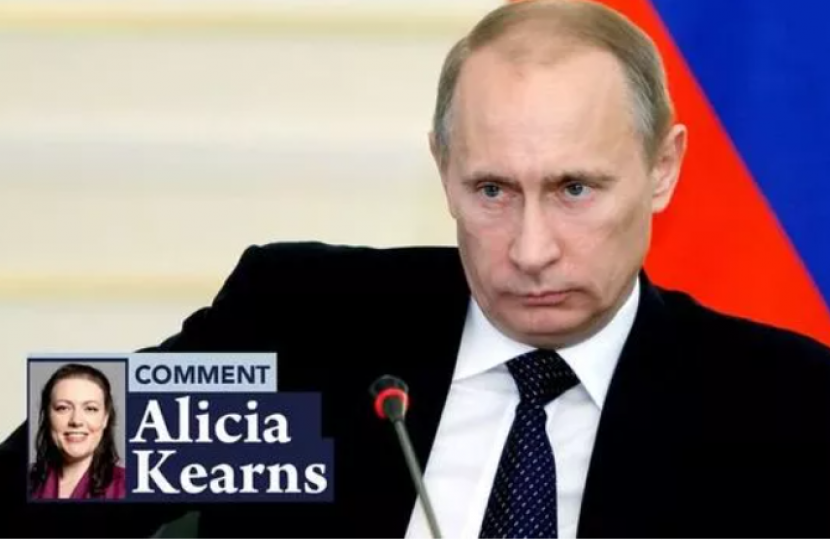 Readers will know that in previous weeks I've written in the Express with usually depressing news on foreign affairs: Violations of the international rule of law, violations of territorial integrity, and gross human rights abuses being perpetrated, particularly in China. It does not make for very pleasant reading.

This week, after much brinksmanship and bluster, it is a relief to report that Russia has announced that many of the 100,000 troops Putin had amassed at the Ukraine-Russia border are returning to base, meaning that armed conflict in Eastern Europe is less likely than it was even a week ago. Over the past few months, the Ukraine-Russia ceasefire had been repeatedly violated, and a Ukrainian soldier was sadly killed just this week.

That the immediate threat is receding can only be a good thing.

But that is, I am afraid, where the good news ends.

We should be under no illusions about why these military manoeuvres were attempted in the first place.

Unrest is growing in Russia; COVID-19 is spreading and freedom fighter Alexei Navalny’s has been sentenced to hard labour in a penal colony for two and a half years for succeeding in failing to be assassinated.

This week, tens of thousands of Russians have taken to the streets to protest against Putin’s corruption and Navalny’s unjust and horrendous treatment.

Navalny is currently on hunger strike and has been refused adequate medical treatment. Be in no doubt, he is being murdered before the world’s eyes whilst his allies disappear from their homes, and his supporters are attacked by police and detained.

But why did Putin once more turn his troops towards Ukraine?

The immediate trigger is the unrest at home.

Putin is doing what he always does when he’s under pressure at home: he sabre-rattles with the West.

Putin is attempting at home to project himself as a great Russian bear, embodying the pride of the Russian people, seeking to restore Russia’s place on the world stage, and demonstrating a show of strength and numbers.

With his actions, Putin forced other leaders to acknowledge and engage with him, as we saw with President Biden picking up the phone to him.

This is one of Putin’s driving motivations, for him to be seen as equal to the US President on the world stage.

However, beyond this, he is also testing us. Testing our resolve to stand by our Ukrainian allies, and a test of our response to his military manoeuvres.

Because, whilst Russia claimed these troop movements were nothing but a military exercise, no war game can be as effective as a real game.

But this time we didn’t flinch. From Berlin, Paris, London and Washington, the message was clear: Russia must withdraw its troops and adhere to the ceasefire.

Washington swiftly imposed sanctions and expelled 10 Russian officials and together with our allies we issued a joint statement, showing again that we are America’s foremost ally when it comes to taking on Russia.

We must continue in this vein. Kleptocracy and corruption is the source of Putin’s power. That is why we must target his wealth and that of his oligarchs who stand up his autocratic regime.

We must target the dirty money. That’s why I so very much welcome the Foreign Secretary’s announcement this week that he will be extending the UK’s Magnitsky sanctions regime to be able to better target dirty money.

Magnitsky sanctions are our new tool, having left the EU, to crack down on the wealth of those who commit human rights atrocities or who are enemies of our nation, as well as restricting their freedom to travel to the UK.

I have long argued that we need to extend our sanctions regime to tackle corruption and those who profit from human rights abuses.

We now need to target Putin’s oligarchs urgently, and before Navalny is tortured to death. Continuing to place sanctions until Navalny receives the medical treatment he needs, and the freedom he deserves from the kangaroo court judgment which facilitates his torture.

Putin will continue to crackdown on dissent at home and project Russian aggression abroad unless the UK and our allies continue to ensure that each provocation will face a specific, and meaningful response – one that hurts him where he cares most: his bank balance.

We must also be absolute in our support to our ally Ukraine. I agree with the Prime Minister that the UK is “Ukraine’s most fervent supporter”.

I was privileged to work with the Ukrainian Government to enhance their ability to tackle disinformation operations against their people from hostile states such as Russia. The October Strategic Partnership between Ukraine and the UK ties us to improved economic relations, political relations and £40 million in aid.

In addition, we are supporting public service reform and media plurality in Ukraine and will be dispatching a destroyer and a frigate to the Black Sea to show solidarity with Kyiv and our NATO allies.

A clear and steadfast response to increased aggression and these sorts of long-term measures demonstrate that the UK is willing to defend the international order and support our allies.

But for the sake of the Russian people, and the stability of our continent, we also need to be prudent.

The escalation achieved its purpose: to draw attention away from Putin’s failures at home and project the narrative of a strong President leading a strong and glorious military empire with a growing sphere of influence abroad.

For the UK, an effective policy to contain Russia within its rightful sphere is forceful when it needs to be, accommodating when necessary, and always conducted in line with our values and our allies.

Putin responds to, and respects, strength.

He revels in indecision and appeasement. A firm stance, and consistent refusal to let violations of international law and human rights abuses go unchallenged does not necessitate increased aggression, but only a recognition that when actions are unacceptable, and lives at risk, we have a duty to hold perpetrators to account and stand by our friends and allies.