A Flag for Leicestershire 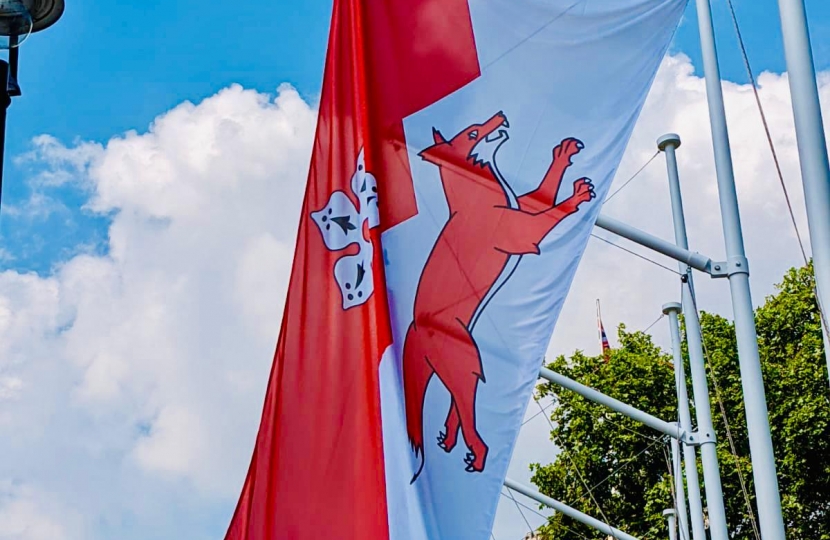 Leicestershire is no longer the only English county without an official flag after the Fox and Cinquefoil was officially registered by the Flag Institute and flew for the first time ever in Parliament Square as part of Historic County Flags Day celebration. Leicestershire was the last County in England to be without a flag.

Since February 2020 I've been working to establish an official Leicestershire flag because our county deserves no less than any other. A Leicestershire Flag gives us an opportunity to learn more about our history and celebrate all that is wonderful about our great county. Our flags carry our history, our pride, help define who we are, and bring us together as communities.

I spearheaded this change in Parliament, and I am grateful to all 7 Leicestershire MPs who wrote in support of this flag.

I want in particular to thank the designer of the flag, Jason Saber, and the campaign group ‘A Flag for Leicestershire’ which has advocated for this design for so many years to ensure that Leicestershire is no longer the only county without its own flag.

The Fox and Cinquefoil flag was designed by Jason Saber, the design features a fox, which has a strong association with the county alongside a red and white serrated field which was a pattern borne by the de Montfort earls of Leicester on his coat of arms. A cinquefoil is a floral emblem meaning “five leaves”. The De Montfort’s were joined through marriage to the De Beaumont’s, who bore arms depicting an ermine cinquefoil against a red field.

“The Flag Institute is delighted to register the final English county flag, that of Leicestershire. The dynamic red and white flag features the emblems of the de Beaumont and de Montfort families, who both held the Earldom of Leicester. Simon de Montfort was one of the founders of modern parliamentary democracy, so it is appropriate that the flag will have its first official raising in Parliament Square to mark Historic County Flag Day, where it will be joined by the flags of the other English, Welsh and Scottish counties in a spectacular display of the emblems of Britain’s centuries-old foundations. We encourage the people of Leicestershire, and indeed all the counties of Britain, to embrace and use their county flags with pride.”

Graham Shipley and Bill Brown, local campaigners on behalf of the ‘A Flag for Leicestershire Group’, said:

“The 'A Flag for Leicestershire' group warmly applauds the raising of the fox-and-cinquefoil flag on Monday 19 July 2021. With this act, the set of registered flags for the historic counties of England is complete. It is a milestone in the life of England and of our county. We are confident that the flag will be a focus for unity around which all the people of Leicestershire, as well as anyone who has an association with the county, can rally in perpetuity.

“We thank the MPs of Leicestershire for their support, as well as the Association of British Counties and the Flag Institute for their long-standing work in promoting county flags.

“We congratulate the designer, Mr Jason Saber, for creating a flag that so clearly evokes the thousand-year history of Leicestershire. It reflects both the colours and the emblems of the existing flags of the City Council, the County Council, and many other local bodies as well as the free-running fox, a symbol of many sports clubs in the great sporting tradition of Leicestershire.

“Above all, we are grateful to the many hundreds of supporters, both across the county and beyond, who have previously shown their enthusiasm for this design and their commitment to it which has enabled this historic event to take place.”

"I first conceived the design of the Leicestershire flag in 2011. Research demonstrated that the county was associated with several traditional symbolic themes, namely; a red and white colour scheme; a serrated division or zigzag; a heraldic device termed a cinquefoil and most obviously, a running fox. The colours and zigzag are present in the civic arms used by Leicestershire County Council and ultimately derive from the shield used by local noble, Simon De Montfort. The cinquefoil, so called for its five petals, was a device used by Robert De Beaumont, 4th Earl of Leicester but whose origins may possibly stretch back to the era of Viking invasions; it appeared on a 1784 map of the county and is now found on the civic arms of several Leicestershire towns. The fox features as a crest on the county council’s arms; whilst originally adopted in token of the origin of organised hunting in the county, it has since become a unique Leicestershire symbol, whose modern status as a distinct county emblem now supersedes that original symbolism and reference. A fox is present on the badges or logos of numerous county organisations and sports clubs, most famously of course Leicester City Football Club and Leicestershire County Cricket Club, both of which are known as “The Foxes”. A fox has become synonymous with the county of Leicestershire much as a white rose is associated with Yorkshire or the Stafford Knot, with Staffordshire."