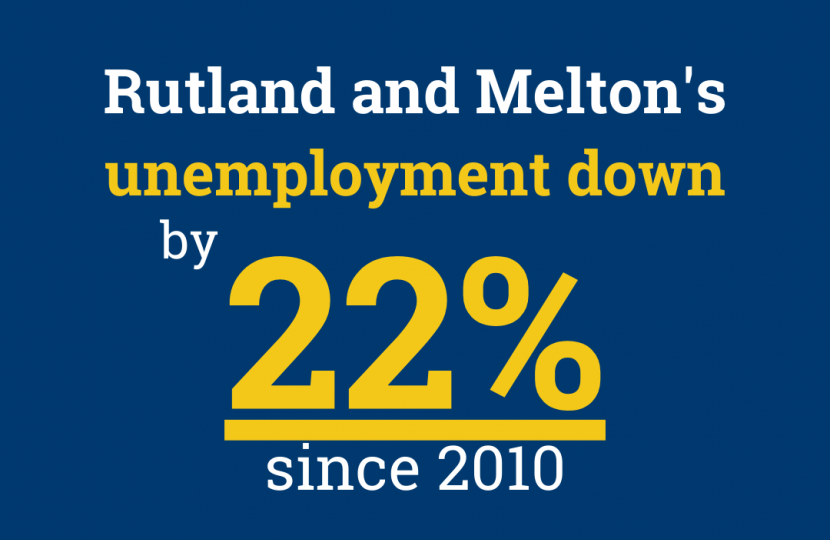 Rutland and Melton MP, Alicia Kearns, has welcomed figures showing that Rutland and Melton’s unemployment level has fallen by 22 per cent and that overall 303,432 more people are in work in the East Midlands since 2010.

The UK’s employment rate is now at a record high and continues to grow and unemployment is now at its lowest since 1974. This means there are more people in work earning a reliable wage every month than ever before, giving more families security and leaving fewer people relying on benefits.

The Government is well on its way to their goal of ending low pay altogether, with the National Living Wage set to increase to its highest ever rate (£8.72) in April, before increasing to £10.50 by 2024. This will recognise the hard work of almost three million people across the country who will get a much-deserved pay rise.

“I welcome the significant fall in Rutland and Melton’s unemployment rate since 2010.

“With more residents in work than ever before, wages rising above inflation, and our decision to reduce taxes for the lowest earners, the good people of Rutland and Melton will have more money in their pockets giving them greater security and more choice.

“As we move forward outside the European Union, I am so pleased that families in Rutland and Melton can plan for their future with more confidence and optimism.”

The Government is set to announce further details of their plans to level up the whole country and spread prosperity at the Spring Budget on March 11th.