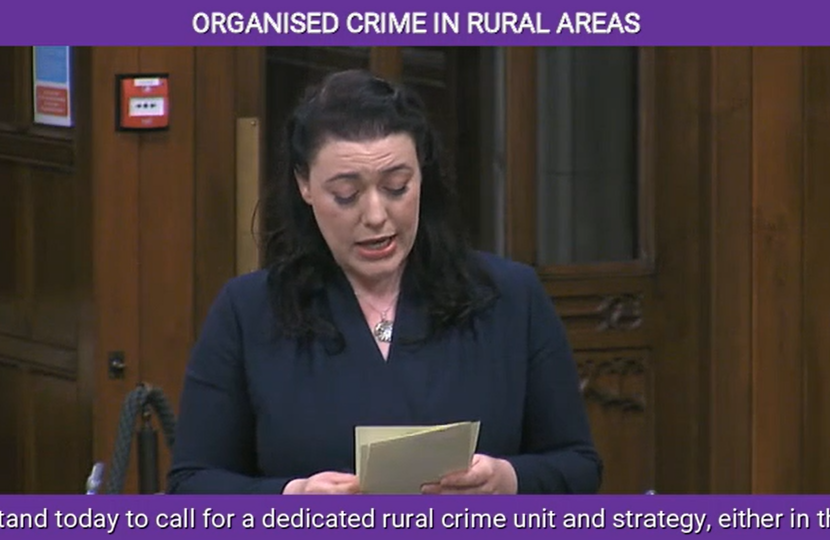 Alicia Kearns secured a Westminster Hall Debate to call on the Government to create a dedicated rural crime unit, for the UK Border Agency to undertake a review into its role in tackling rural crime, given that much of the proceeds rural crime can end up with mainland Europe and to develop a specific training programme on rural crime for 111 and 999 phone operators.

In 2018 alone, rural crime cost the UK economy a staggering £49.9 million and the Midland’s economy £9.8 million, representing a 10.3% increase on the year before. In Leicestershire, rural crime went up nearly 40% year on year according to the NFU Mutual’s Rural Crime Report in 2019.

“I was determined to secure this debate on organised rural crime because I know this is a real concern for Rutland and Melton residents.

“I was elected on a commitment to fight rural crime and I remain dedicated to ensuring that its true nature – organised crime – is recognised by the Government. When a tractor is stolen from Melton on a Thursday night and is Poland on a Friday, this can only be the actions of organised crime networks.

“Like all crime, we can only beat organised rural crime by creating a robust strategy and responding seriously to reports of offences. We can stop the fear and must start taking victims concerns more seriously”.

Alicia Kearns is currently seeking funding to undertake an inquiry into the organised nature of rural crime where she will bring together experts in tackling organised crime groups such as County Lines and Counter-Terrorism with rural community experts to identify solutions and reveal the true nature of this crime.

Rutland and Melton’s MP raised her concerns that ‘For many rural people, especially farmers, their homes are their businesses, so when they are attacked, they feel that their families, children and livelihoods are under threat. They often live in highly isolated areas, on their own, where feeling under attack can cause long-term mental health issues’. Alicia Kearns is right to raise these concerns as a recent report by the National Farmers Union found that 84 per cent of farmers under the age of 40 believe that mental health is the biggest hidden issue they face.

Alicia Kearns is working hard to support constituents to respond to the Coronavirus outbreak but is determined to continue to work with local and national stakeholders to further inform the Government about what steps need to be taken to tackle rural organised crime.