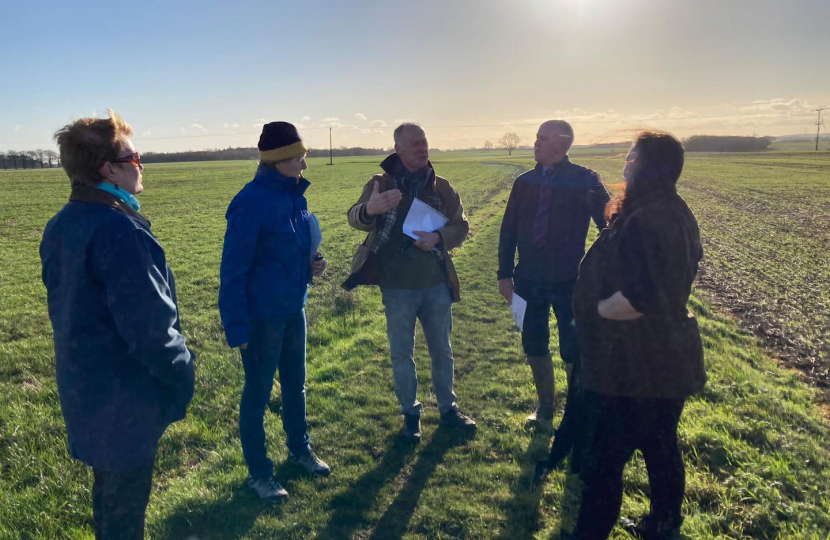 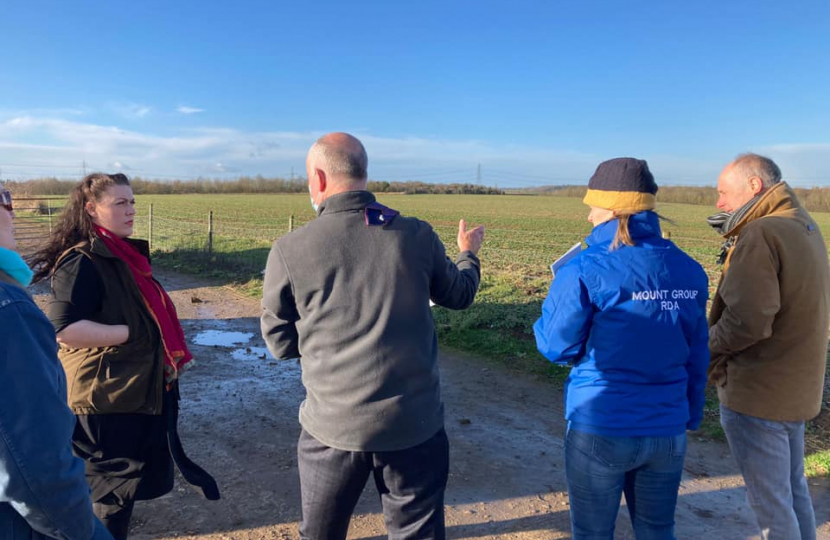 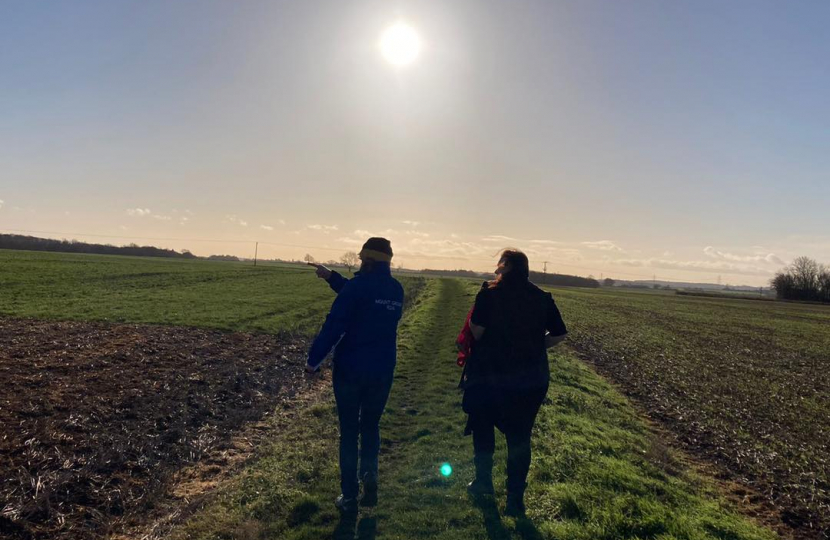 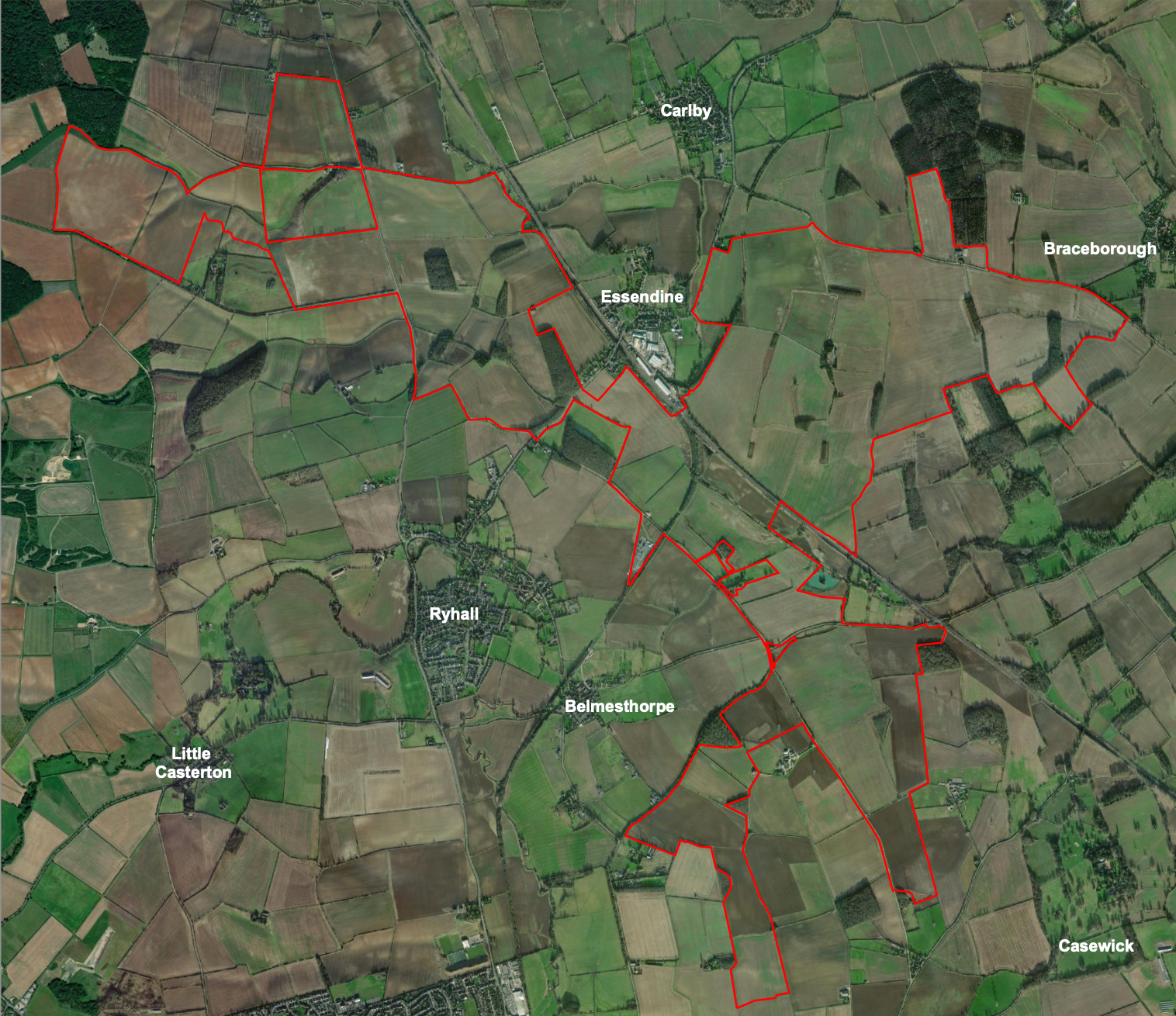 It would be eight times the size of the U.K.’s largest solar plant – the 250 acre Shotwick Solar Park in Flintshire. It’s the size of 1,400 football pitches. It’s so large that it can’t be approved by Rutland County Council – it has to be approved by the Government as a Nationally Significant Infrastructure Project.

We all want to play our part in achieving Net Zero –  but this scheme would be a disaster for our environment, biodiversity, and our very way of life.

Together with Mallard Pass Action Group and local Councillors, I’m working to convince the Government to take residents' views into account – and stop this development.

You can read more about why we need to stop this development here – and add your name to the petition below.

All my best to you and yours -

I wrote to Canadian Solar and Windel Energy to request that they give a proper amount of time for local residents to make their representations. 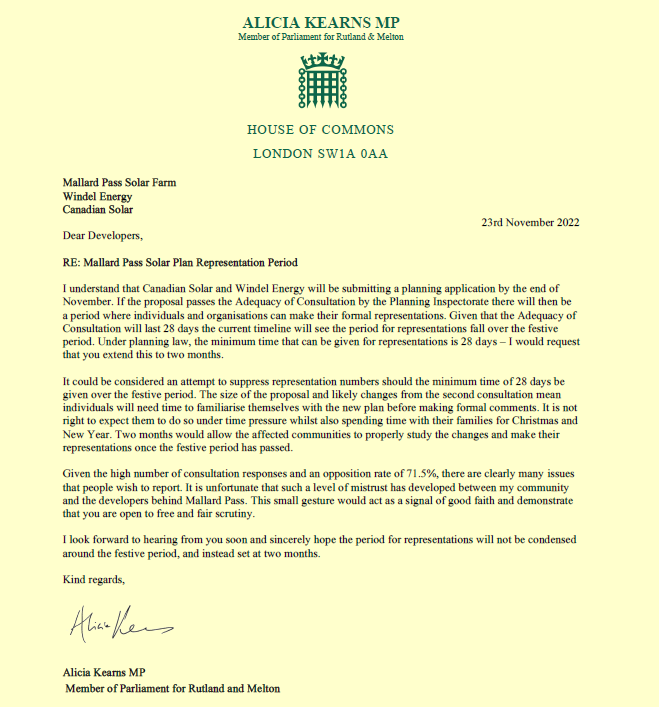 1st November 2022 - Letter to Minister of State in the Department for Business, Energy and Industrial Strategy

I wrote to the Minister of State in the Department for Business, Energy and Industrial Strategy over allegations of forced labour in Canadian Solar’s supply chains.

I wrote to the Foreign Secretary to request that he investigates allegations against Canadian Solar.

I have submitted my feedback for the second consultation for the proposed ‘Mallard Pass’ solar plant, which you can read below.

Since this development was first proposed I have held grave concerns and sadly the failure of the developers to engage properly with myself and the community have only added to these. From dropping out of a public meeting only a few days before to failing to meet with me in Parliament to discuss allegations of forced labour in their supply chains, a serious break in trust now exists.

This development should be refused planning permission for the following reasons:
•    Size, 2,238 acres is too large and would make it over eight times larger than the current largest solar plant in the UK
•    Loss of graded agricultural land, with the whole site classified as Best and Most Versatile under Government Guidance issued in 2015
•    Allegations of forced labour in Canadian Solar’s supply chains
•    Biodiversity and environmental concerns, particularly for Rutland’s rare bird population
•    Traffic, particularly of lorries passing local schools on rural roads
•    Flooding, with several areas effected already classified as at risk
•    Poor public engagement by the developers

I would strongly urge anyone who has not yet done so to submit their consultation response by tomorrow. As always, if you wish to sign my petition against Mallard Pass please email me your address to Alicia.kearns.mp@parliament.uk and I will post a petition sheet to you.

I will continue to work in Parliament and the local community to fight this proposal. Please do your part and register your opposition today. 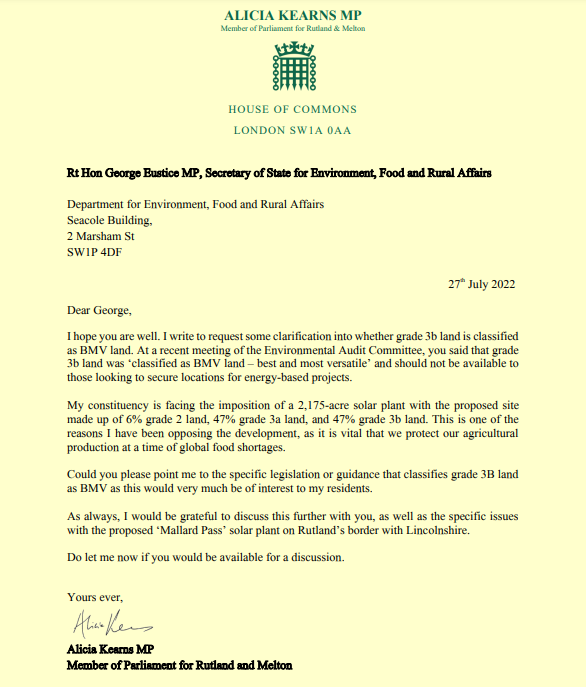 I wrote to Highways England to request their opinion and share my concerns about the likely impact on our rural road infrastructure should Mallard be built.

I met with Energy Minister Greg Hands MP to discuss Mallard Pass and the primary developer, Canadian Solar. I will continue to encourage the Government to scrutinise this proposal and it’s developers, particularly on the issue of human rights.

I held a meeting with researchers from Horizon Advisory who have been responsible for exposing the forced labour risks in Canadian Solar’s supply chains. It was extremely useful to hear about their research and has made it even clearer to me why we must fight this development.

I held a meeting with a representative from SHARE, the organisation that has been working with concerned shareholders in Canadian Solar to hold their board members to account for failing to properly address accusations of forced labour in their supply chains.

I wrote to Minister Hands following revelations that some of Canadian Solar’s own shareholders were working with an advocacy group (SHARE) to remove board members who had failed to act on allegations of forced labour in their supply chains.

It was great to visit the Rutland County Show and to collect signatures for my petition against Mallard Pass with the Mallard Pass Action Group and CPRE Rutland the Countryside Charity. Thank you to everyone who signed – together we can stop this! 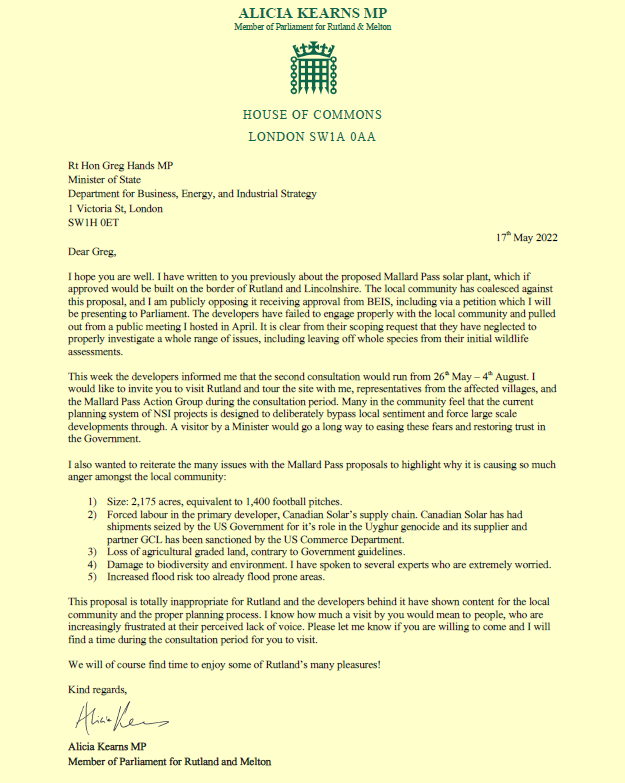 I wrote to the Minister for Energy, Greg Hands MP, laying out concerns and inviting him to visit Rutland during the second consultation.

I wrote to residents living near the proposed site for Mallard Pass to lay out my concerns over the proposal and to invite them to sign my petition, which I will present to Parliament. I have also launched a letter writing campaign, encouraging people to send a letter with their concerns to my Parliamentary Office at:

Please do write in but also remember to submit your objections to the consultation by emailing info@mallardpasssolar.co.uk

I hosted a public meeting with residents to discuss the proposed Mallard Pass solar plant. The developers had promised to attend but disappointingly dropped out only a few days before. Everyone in antecedence agreed on the importance of our community coming together to fight this inappropriate proposal – thank you to everyone who gave their time and shared their thoughts.

Mallard Pass has announced that they will not be sending a representative to the residents' meeting in advance of the second stage of the planning consultation, citing the fact that ‘new information regarding our proposals for Mallard Pass will not be available’.

The meeting will go ahead, as planned, and Alicia Kearns hopes that Mallard Pass will change their mind and send a representative – a seat will be kept free for them.

I wrote to the Prime Minister to lay out concerns over Canadian Solar’s human rights record. I will continue to raise this issue with the Government and to make clear that Rutland will never tolerate such company building in our communities and on our agriculturally rich fields.

Following revelations that Canadian Solar had shipments seized by the US Government for containing panels built with blood labour from Xinjiang, Alicia Kearns has written to the Foreign Secretary and Business Secretary to request that they seriously consider sanctioning the Mallard Pass developers for their use of slave labour in production of panels.

In a debate on large solar farms in Westminster Hall, Alicia Kearns spoke about the human rights abuses that the developers of Mallard Pass, Canadian Solar, permits. 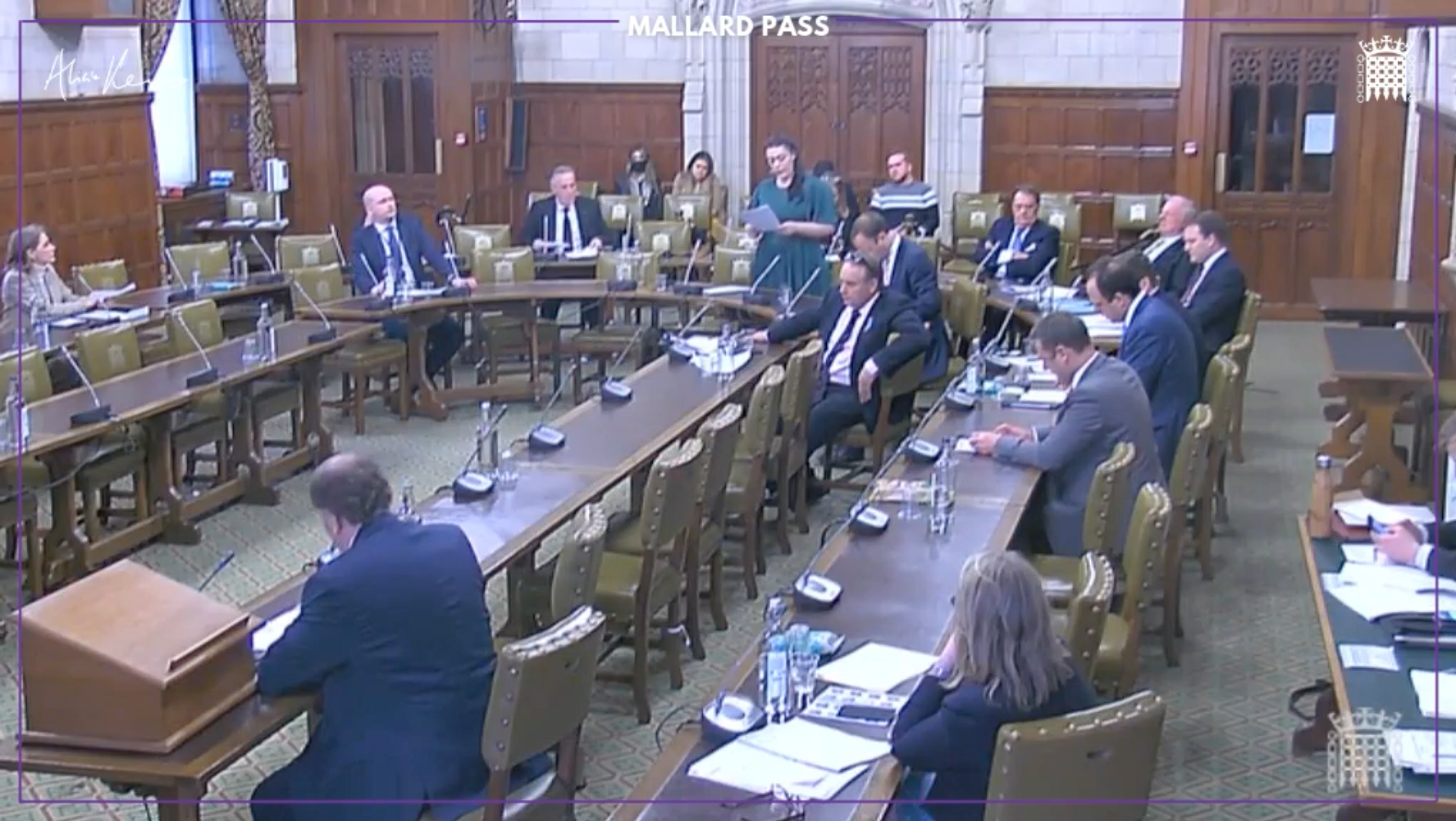 Alongside the Mallard Pass Action Group, Alicia Kearns will host a public meeting at Essendine Village Hall on 7th April at 6pm.

This meeting is open to any resident of the Rutland and Melton parliamentary constituency, but spaces are limited. Spaces can be reserved here.

Alicia Kearns MP was interviewed by BBC East Midlands for their story about the Mallard Pass solar plant.

In addition to the online survey, campaigners have been circulating a paper petition, which will be presented before Parliament. 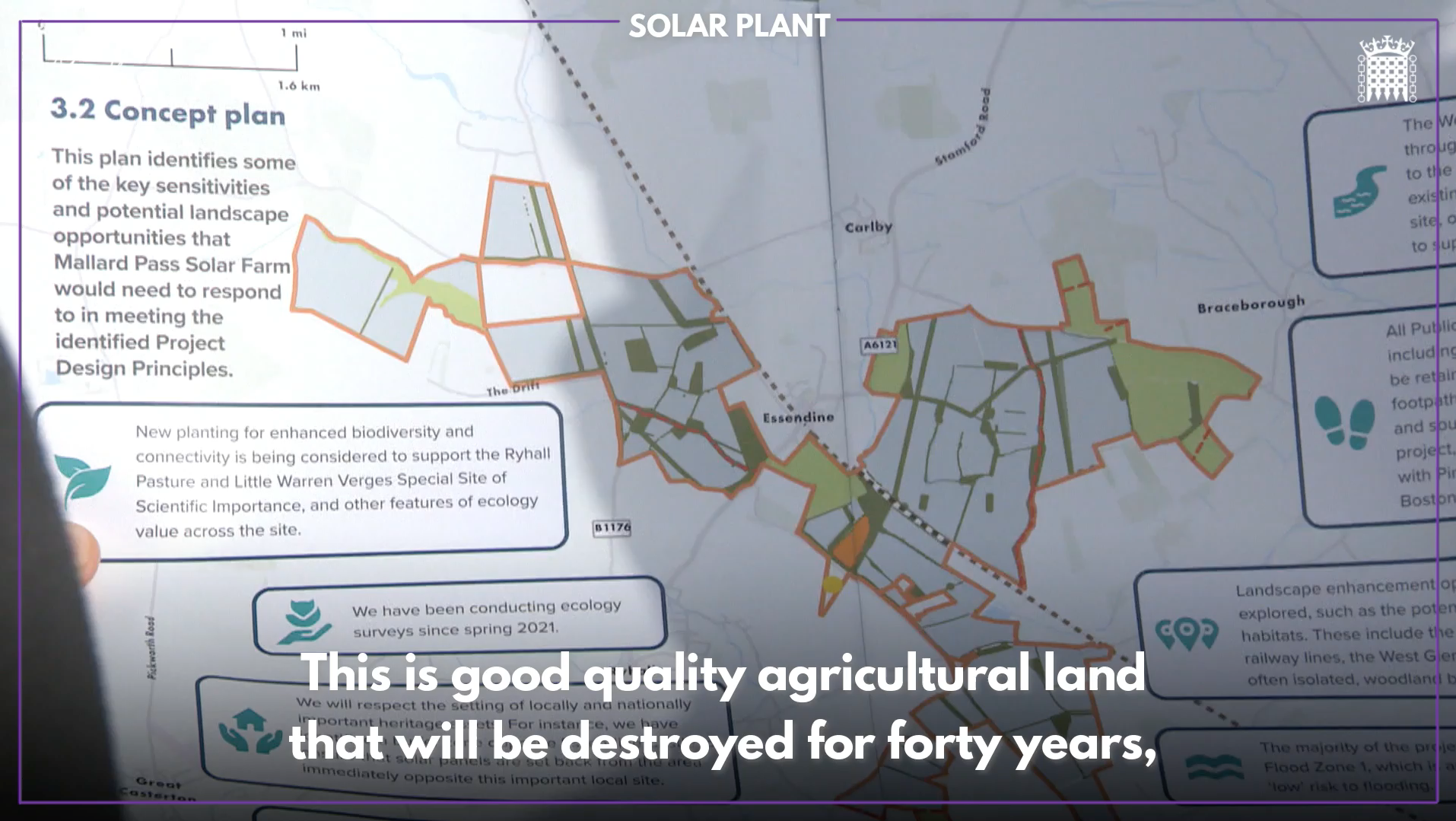 In a debate on Taiwan, Alicia Kearns raised the important issue of how the panels that would be the basis of Mallard Pass. 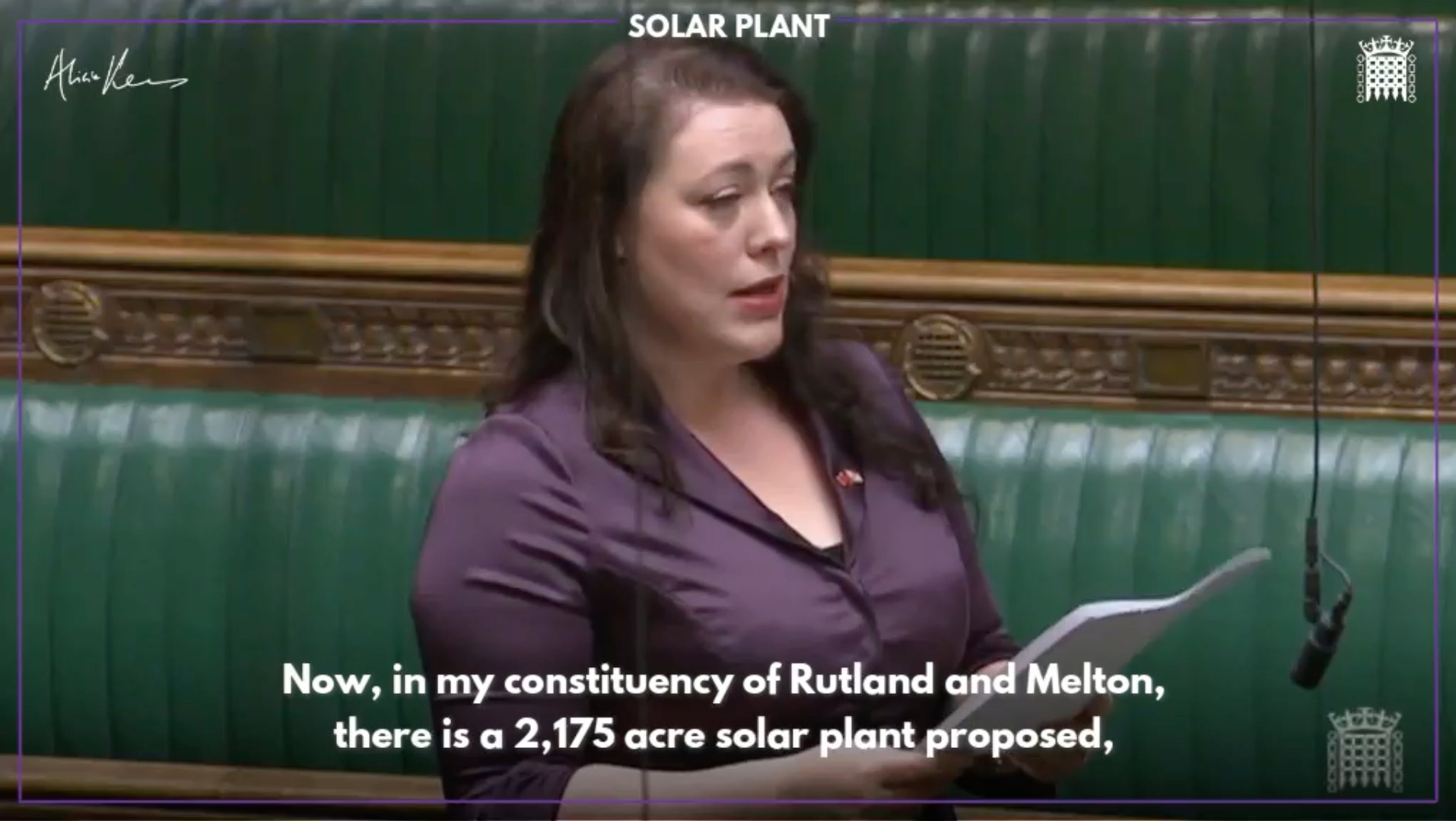 Alicia Kearns meets the Secretary of State for Environment, Food and Rural Affairs, George Eustice, to show him the scale of Mallard Pass, and to reiterate the country’s need to protect our precious agricultural land. 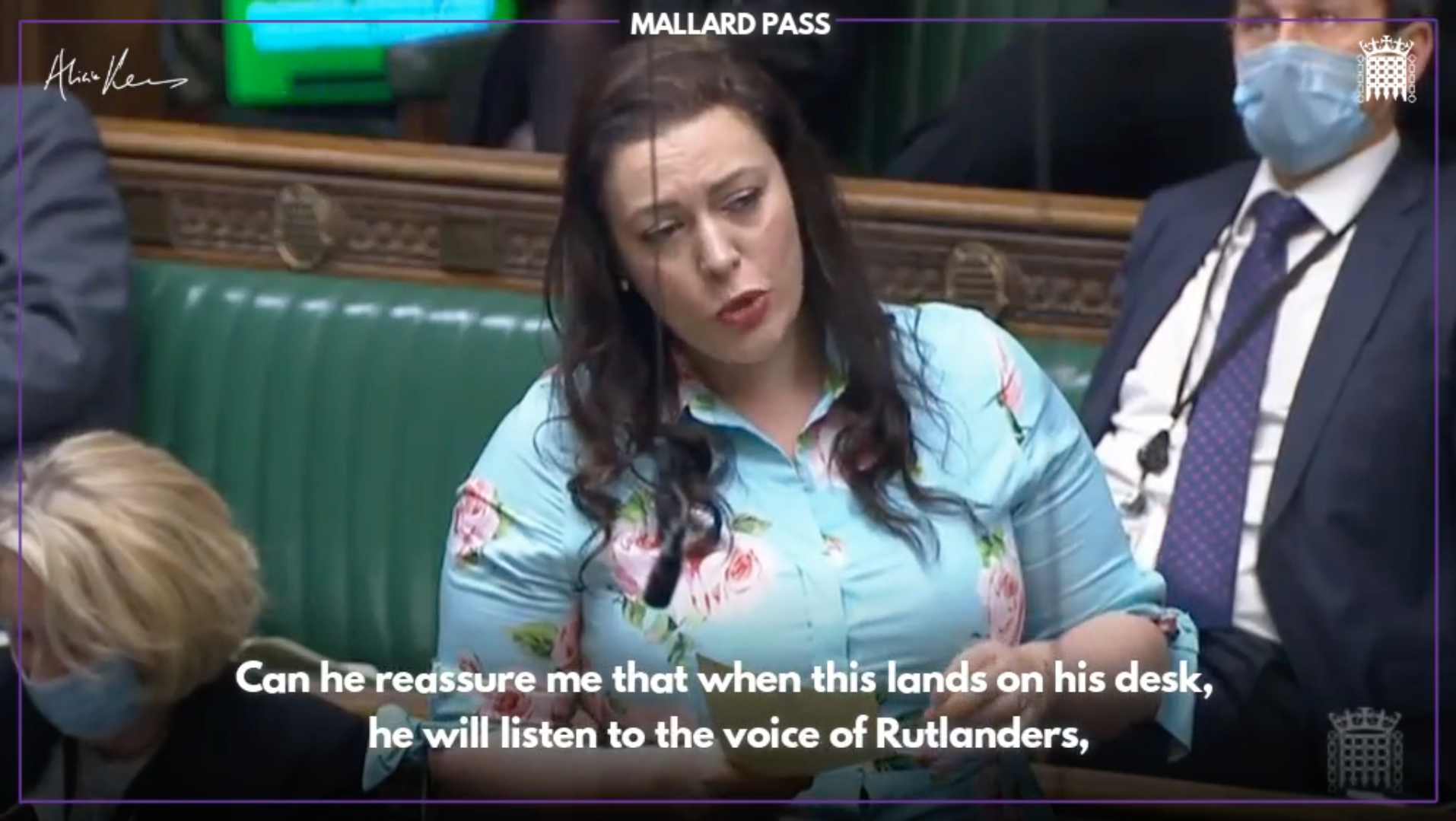 Alicia Kearns has visited the proposed site of the 2,175-acre Mallard Pass, alongside councillors and members of the Mallard Pass Action Group 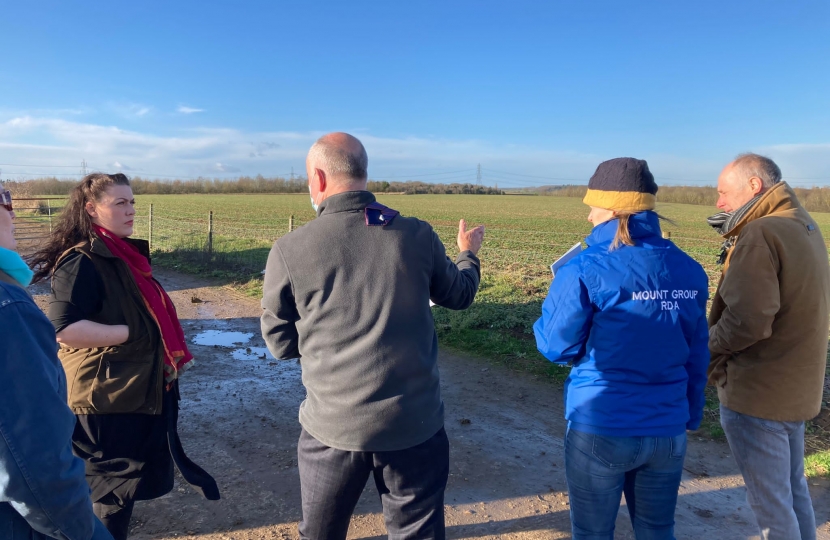 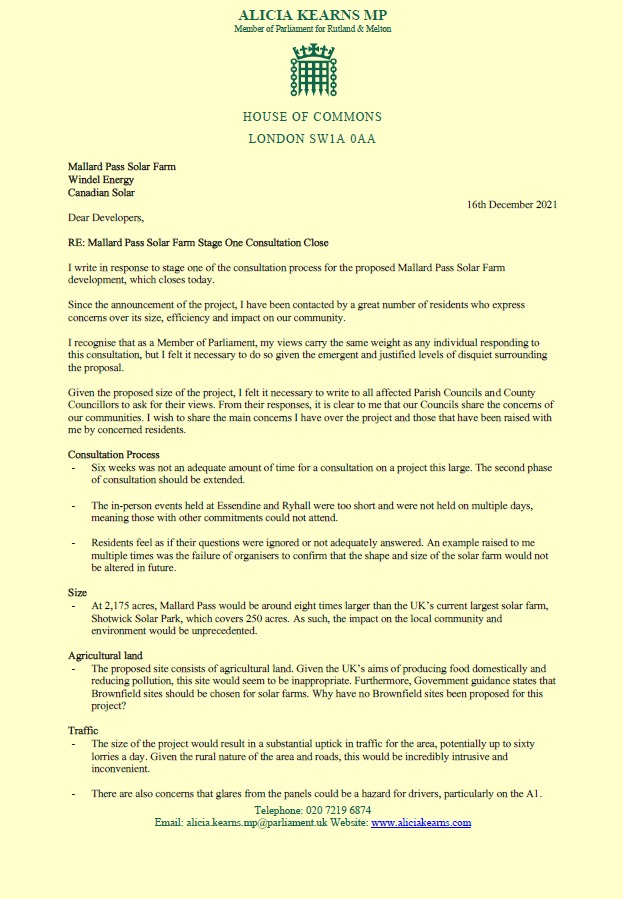 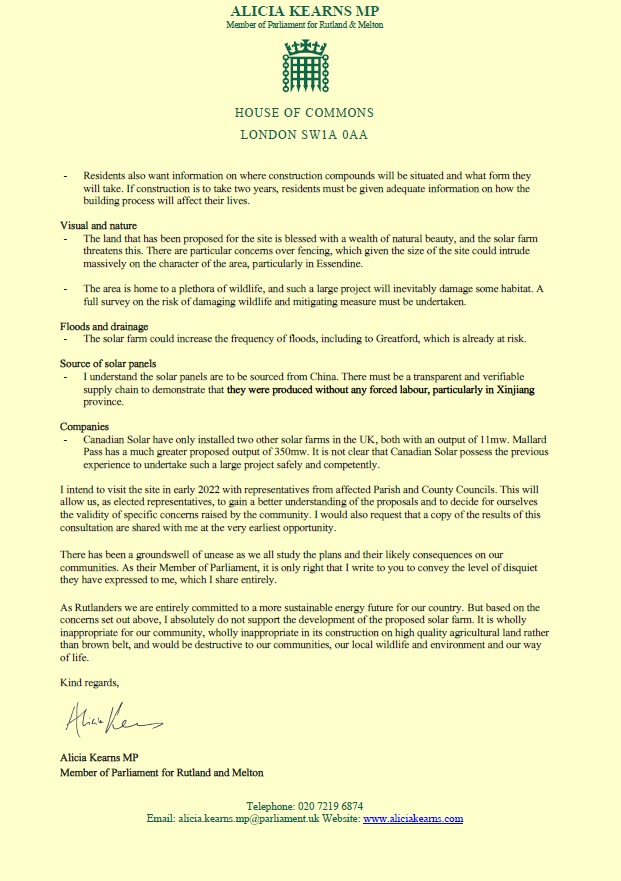 In Essendine on Thursday evening, a packed village hall had the opportunity to ask Alicia Kearns MP, as well as members of the Mallard Pass Action Group, questions about the proposed Mallard Pass solar plant.

Alicia Kearns MP has made her opposition to the proposed 2,175 acre Mallard Pass solar plant in Eastern Rutland clear – and has always been adamant that the decision on the Nationally Significant Infrastructure project must take local opinion into account.

Alicia Kearns MP has written to Canadian Solar and Windel Energy, the developers of the proposed Mallard Pass Solar Farm, to set out her opposition to the proposed 2,175 acre development – which would be the UK’s largest solar farm by a factor of eight.