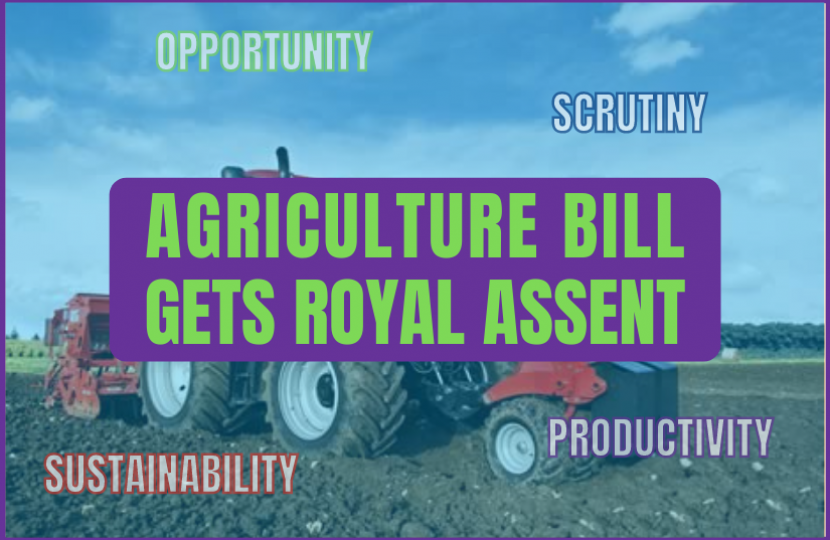 Over the last two years, this historic piece of legislation has been scrutinised by the House of Commons, the House of Lords and various stakeholders across all four nations.

The Agriculture Act will see funds released as a result of the phasing out of legacy subsidies to be re-invented into a roll out of the UK’s new farming policy.

This support will be centred around ambitious plans for a new land management system where farmers are rewarded with public money for public goods, such as improving air and water quality and providing habitats for wildlife. At the same time, it will help to boost productivity and maximise the potential of land for producing high quality food in a more sustainable way.

Just last week, the Government introduced a new amendment to the Bill (now Act) to bolster Parliamentary scrutiny of free trade deals and ensure they deliver for the UK’s farmers. On top of this, the newly extended Trade and Agriculture Commissions report on the impact on animal welfare and agriculture of each new free trade deal will be laid before parliament at least 21 days before any treaties.

“ Rutland and Melton farmers are now in a stronger position to begin the agricultural transition on January 2021 thanks to this landmark Act, which bolsters support for our farmers, recognises their environmental stewardship and takes welcome steps to help tackle climate change.”

“Having gone through this Act line by line in the Agriculture Bill Committee, I welcome the Government’s recent amendment which rightly places our farming and food producing industries at the heart of future free trade agreements.

“ I’m proud to have worked with local farmers and my colleagues in Government to scrutinise this landmark bill and ensure it delivers for us here in Rutland and Melton.”

The changes to agricultural policy contained in the Agriculture Act will be rolled out over a 7-year transition period to give farmers and land managers time to adjust to the loss of direct payments. The Government will set out their plans in further detail later this month.