Alicia Kearns Writes for the Daily Express: Sino-British Relations – What is the State of Play 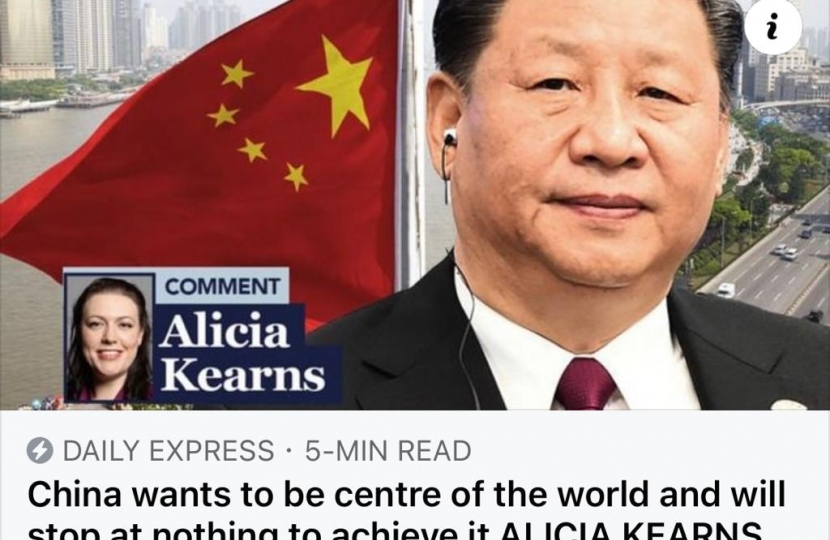 Sino-British Relations – What is the State of Play

The Chinese call China the Middle Kingdom, and to be at the centre of the world is what the Communist Party has in its sights. Here in the West, we cannot afford complacency about what this means for our safety and prosperity.

The last year has been as testing a time for the Sino-British relationship as I can remember, from the Chinese breaking our Treaty with them on Hong Kong to our Foreign Secretary rightly announcing sanctions on senior CCP officials responsible for genocide against the Uyghur people. Our Government has made clear that we will not stand by while a people is exterminated, its culture erased, and its language silenced in the pursuit of absolute obedience to an autocratic state.

The Chinese Communist Party requires drone-like conformity in the Chinese people. Failure to comply with the regime is punished, and all are expendable in the eyes of a government that has complete contempt for the rights of the individual.

We see this time and time again, from the longstanding cultural and religious genocide in Tibet to the sterilisation of women and forced labour in Xinjiang, and the introduction this week of further laws to extinguish the light of democracy in Hong Kong.

China has adopted an aggressive approach internationally, supported by its so-called warrior diplomacy. Its Belt and Road policy is neither about bringing investment where it is needed nor furthering free trade. It uses a relentless deployment of capital to indebt developing nations, entrap them in its sphere of influence, and ensure compliance.

The CCP treats the developing world like their own people – promising investment in return for compliance. Yet contractual chicanery sees countries sign away precious natural resources in return for promises of infrastructure, whether roads, hospitals, or schools. No sooner has the ink dried than the partner nation may find a road built or, indeed, a hospital. Then they walk inside and discover no functioning utilities, leaving them with a hollowed-out shell they cannot turn into a functioning medical facility.

The international world order is policed, if you will, by a series of institutions created to uphold the values of liberal democracy. In order to gain international hegemony, the Chinese Communist Party is intent on controlling multilateral bodies such as the UN, Interpol, and the World Health Organisation. How do they do this? By leveraging their entrapment diplomacy to win elections to international committees, to head up organisations or to whip votes.

In the last year, the Chinese Communist Party secured China a place on the UN Human Rights Council, where it judges whether nations are upholding human rights and commitments to international law. It is simply laughable that a regime which suppresses democracy and commits genocide sits in judgement on others. Except it isn’t funny, because the cost is denial of mass atrocities. In 2018, the Chinese Government’s Meng Hongwei had headed up the international policing organisation, Interpol for two years. He evidently displeased his government and was kidnapped and forced to resign his post. He is now in prison. We are all far too aware of how China’s influence of the World Health Organisation has devastatingly impacted on us all.

But let’s be clear, this is no lofty game of geo-politics. The aspirations of the Chinese Communist Party affect us directly here in Britain. Daily, we face economic and intellectual espionage, cyber-attacks, information warfare, as well as attempts to subvert the independence of our universities and to weaken our infrastructure, our Government and our hard-won freedoms and way of life.

This is an autocratic regime with a President who is increasingly flexing his muscles internationally and at home. China is having to adjust to a Global Britain. We are liberated from the sclerotic bureaucracy of the EU and its inconsistent and ineffectual foreign policies, which saw it sign a comprehensive trade deal with China last month. China is unsure what a Global Britain means and will be anxious to establish parameters within which it is happy for us to operate. Currently it sees us as a threat because we have demonstrated in the last two weeks our ability to unite over 30 countries to hit out against perpetrators of human rights abuses, that we will navigate a forthright path in the world, and that Global Britain we stand up unapologetically for individual liberty, democracy and the international world order. China is still learning about a UK freed from the sclerosis and bureaucracy of the EU, and it will need to adapt.

It is not we who are positioning ourselves as a threat, quite the opposite. The UK is not seeking conflict with the Chinese Government, and nor should we. We do not want to enter an era of frozen relations. We do, however, need to recognise where the Chinese Communist Party’s ambitions undermine our safety and prosperity and ensure we have ready a comprehensive range of offensive and defensive capabilities to protect our people and our values. We have opened our doors to China to trade and work together on issues of mutual interest. We want to see China succeed. We want China to be a healthy competitor and partner. But that requires China to operate within the International Rules Based System.

What does this mean for Britain? We must fully embrace Global Britain, and we must not sit back. The Government’s Integrated Review sets a bold vision for a more assertive Britain, one that puts security and resilience at its heart and the need for whole-of-government offensive and defensive capabilities to keep us safe.

We must develop an alternative to counteract the Chinese Communist Party’s policy of entrapment diplomacy. A Global Britain can make the world more secure by extending the hand of economic liberty to the developing world to ensure developing nations thrive, and in so doing make the world safer and more secure. The Commonwealth is central to this. We must offer a meaningful alternative to our friends across the world.

We must invest in diplomatic, economic and trade relationships internationally that further fair and honest brokering between nations. This means encouraging China to open up and achieve market economy status, as well as standing by our friends and closest allies, such as Australia, when they are threatened. UK membership of the Comprehensive and Progressive Agreement for Trans-Pacific Partnership is central to this.

We must build the resilience of the international rules-based system and our alliances to abuse, including The World Health Organisation, Interpol, and the UN. That is why I secured an inquiry on this at the Foreign Affairs Committee.

We must work to mitigate and curb the worst excesses of the Chinese Communist Party, to end the industrial eradication of the Uyghur, and stand on the side of democracy and the people of Hong Kong, Tibet and Taiwan.

At home we must protect our democracy, institutions, businesses and our way of life. As we build our defences against espionage, disinformation, and infiltration of academic institutions, we must refuse to kowtow to the Chinese Communist Party’s grievous assaults on our Parliament and our freedoms with their attempts to silence MPs who speak out against human rights atrocities.

All of this has to be underpinned by a much-improved understanding of China’s goals, strategic intent, and internal drivers and pressures. It is an autocratic regime that is driven by its own internal divisions, interests and narrative, and we in the West do not focus on that sufficiently.

I want China to succeed, the UK wants China to thrive as a market economy which respects the international world order and the liberties of individuals. But while that is not even a remote prospect, we cannot allow this systematic competitor to become a systematic threat to our prosperity, security and freedoms.

Alicia Kearns Writes for the Daily Express: Sino-British Relations – Britain must stand up to Beijing

Sino-British Relations - Britain must stand up to Beijing