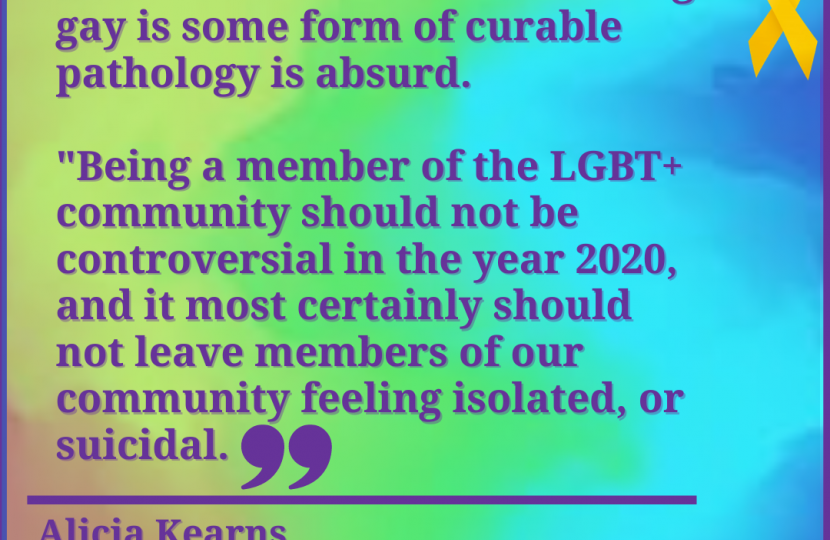 Every year on World Suicide Prevention Day, we have a duty to consider how we can create a world where fewer people feel they have no option left but to take their own lives.

As an MP, I’m fortunate enough to be able to push for tangible solutions to issues which harm our communities, and I’m determined to ban so-called LGBT ‘conversion therapy’ which causes life-long emotional, and sometimes physical, trauma.

I’m sure some readers will be surprised that this fraudulent and abusive practice still takes place in our country. Indeed, I was appalled to learn that 2% of respondents to the government’s 2018 LGBT survey had undergone malign attempts to change their sexuality, to tell them that their sexuality is a pathology in need of curing.

Of those who had undergone this so-called therapy, almost 70% reported having suicidal thoughts as a direct result of their ‘treatment’.  Since being elected, I have been devastated by the stories that members of our LGBT+ community have been brave enough to come forward and share with me, and I thank them for doing so. Stories of electrocution, coercive rape, appalling abuse, deprivation of basic needs, and perverted and fraudulent so-called counselling and emotional torture. Because let me be clear, this practice is nothing less than a form of torture, the effects of which scar survivors for the rest of their lives.

Being a member of the LGBT+ community should not be controversial in the year 2020, and it most certainly should not leave members of our community feeling isolated, or suicidal.

Therefore, ending this practice has been an absolute priority for me, and I’m delighted to have received the backing of both the Prime Minister and Health Secretary, who both recognise that this is an abhorrent practice.

The sheer notion that being gay is some form of curable pathology is absurd. Being a member of the LGBT+ community should not be controversial in the year 2020, and it most certainly should not leave members of our community feeling isolated, or suicidal. Allowing this cruel practice to continue within the law propagates societal prejudices, and gives legitimacy to those who wrongly seek to vilify, denigrate and demonise others.

Survivors of ‘conversion therapy’ deserve a legal recourse to justice, to prosecute those responsible for their abuse and deter perpetrators from performing it. The Conservative government must and will protect the right of individuals to determine their own sexuality free from the fear of abhorrent so-called treatments that directly lead to people taking their own lives.

Any legislation to end the scourge of ‘conversion therapy’ must be targeted, measured, robust, have victims at the heart of it and be guided by our commitment to human rights and freedom of conscience.

I want to see legislation passed that criminalises a person who forces someone to undergo ‘conversion therapy’, aids in the execution of this abusive procedure, or fails to protect a child, who under no circumstances can consent, from the so-called treatment. I also wish to see fraudulent advertisers of ‘conversion therapy’ stopped and prosecuted.

The Government must and will protect the right of individuals to determine their own sexuality free from the fear of abhorrent so-called treatments.

But we must go further than simply criminalising ‘conversion therapy’ and work at every level of our justice system, focusing on prosecution alongside prevention, safeguarding and closure for survivors.

We can seek to prevent and safeguard by placing a legal mandatory duty to report to police known or suspected cases of children or vulnerable people either undergoing, or being at risk of undergoing, ‘conversion therapy’ on health and social care professionals as well as teachers. If created, Conversion Therapy Protection Orders could then be issued by the Family Court to protect these vulnerable children or adults, including from being taken abroad for this vile practice. Any changes to the law must put survivors first, guarantee their lifelong anonymity and provide them with support under the Code of Practice for Victims of Crime.

I recognise that for many people who have grown up in a religious community, engaging with faith leaders can be part of their process of coming out, and I am committed to ensuring the legislation does not create an environment of fear for religious members of the LGBT+ community, nor religious ministers who wish to support members of their parish, regardless of their personal opinion. Many senior religious leaders from faiths across our country have given their full backing to a ban, because they too recognise that there must be a recourse to justice for those who seek religious guidance, and where that is met with improper practices by religious figures.

It would be unrealistic to expect legislation to eradicate a malign practice such as this completely, but it can help us close in on the worst practitioners, take a clear stand in our country that we embrace the LGBT+ community, and give survivors the support and crucially justice they so utterly deserve.

I’m proud to stand alongside so many of my colleagues on this important issue and very much hope that today will be the last World Suicide Prevention Day where the UK is plagued by the vile practice of conversion so-called therapy.