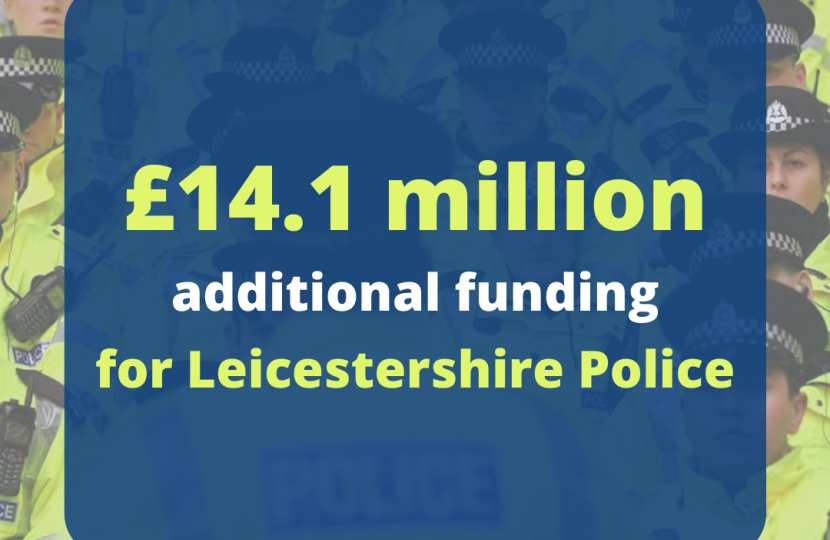 The Government has announced an increase of £1.1 billion for police forces throughout England and Wales, with Leicestershire Police set to receive a £14.1 million cash increase from April this year.

The new funding has been allocated to fulfil the Government’s manifesto commitment to strengthen the UK’s police force by recruiting an extra 20,000 police officers and ensure they have the power and equipment to keep our streets and communities safe. This year, Leicestershire Police will receive an additional 89 officers, with more to come in the future.

The £1.1 billion increase represents the largest police funding increase in a decade and will also see more money available to invest in national priorities like tackling serious and organised crime, and our counter-terrorism capabilities.

Rutland and Melton’s new Member of Parliament, Alicia Kearns, has urged members of opposition parties to vote in favour of this much-needed funding settlement when it comes before Parliament.

“I welcome this vital funding boost that will bolster the fantastic work already being done by Leicestershire Police.

I was elected on a manifesto commitment to crack down on crime and back our brave police to get on with the job, and I am delighted that we are wasting no time in delivering on that promise now.

This landmark funding, the biggest increase in a decade, will ensure that Leicestershire police have the resources and powers needed to keep our residents and communities safe.”

The increased funding is part of a package of measures the Government are implementing to fortify our police. In April, funding for counter-terrorism policing will rise by £90 million, £150 million will go to tackle serious and organised crime alongside £20 million to stop county lines drug traffickers exploiting young people.

In coordination with funding increases, the introduction of Serious Violence Reduction orders gives the Police the power they need to get more weapons off our streets and the criminal justice system has been tasked with developing a swifter response to knife carriers so anyone caught with a weapon will be arrested on the spot, cautioned or charged within 24 hours, and have their first court appearance in less than a week.