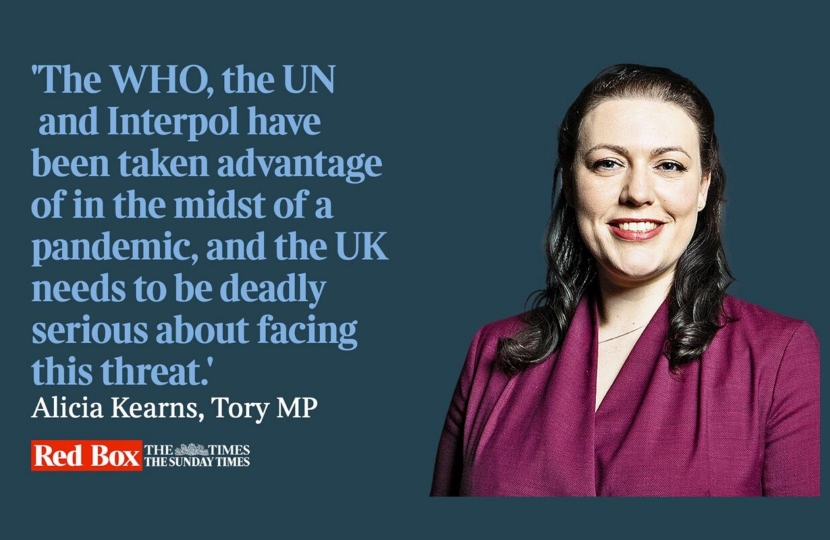 Multilateral organisations are under siege, and, by extension, so is the rules-based international order. Since at least the Second World War, Britain and her allies have stood shoulder to shoulder to defend this order; our strong alliances are our greatest strength. When international organisations are undermined, it is not just an assault on our values, but a test of our own strength, of our bonds with the Five Eyes, G7 and Nato, and our ability to curb the worst excesses of malign states.

When the WHO, the UN, and Interpol, to name but a few, are taken advantage of in the midst of a pandemic, parliament needs to be deadly serious about facing this threat not just to Britain, but to us and our close friends everywhere. It puts at risk our national security and the alliances we have worked so hard to create.

The pandemic has laid bare some of the best and worst of international institutions. The IMF, for example, has released $100 billion in urgent financial support in response to the needs of 102 countries and provided emergency debt relief for 27 nations. Unfortunately, the pandemic has also reminded us that international organisations can be co-opted by powerful interests, as some states attempt to bend them to their own will. It is widely reported that the WHO delayed officially recognising Covid-19 as a pandemic in response to pressure from the Chinese government. Similarly, the WHO continues to refuse to recognise Taiwan, even though many states applaud its concerted response to the pandemic.

Covid-19 is exposing how malign international actors attempt to exert undue pressure at best and at worst subvert and undermine international organisations. The virus has revealed how corruption and the exercise of undue pressure can paralyse these vital institutions. That is why, since joining the foreign affairs committee, I have lobbied for a review of the multilateral organisations of which we are a member to determine if any are in need of reform to build their resilience and counter the malign interests of those states seeking to hijack them for their own purposes. I am delighted that this review will now go ahead.

This is not a call for the UK to withdraw from international organisations nor to downgrade our role within them. Great Britain should be rightly proud that we have always been crucial architects of the international order and celebrate the pivotal role of inspirational leaders like John Maynard Keynes at Bretton Woods and Winston Churchill at the UN Security Council, for example. The UK has long played a key role in promoting more liberalised trade, and we must engage further now as an independent trading nation and as a member of the WTO.

Our alliances are among our greatest assets, and we must be unapologetic and bold in our defence of them. The protection and advancement of Nato and Five Eyes alliances belong at the centre of our national security strategy. That should not make us naive about how international organisations are manipulated by our adversaries. This review will enable leading diplomatic practitioners and experts to help us understand crucial issues such as how hostile intentions are pursued through international organisations; the extent of state and individual corruption (for example, in Fifa and Interpol); what reforms might be needed; how we can prevent corruption; and which allies and partners we can rely on to promote an agenda of better and more responsive multilateral institutions.

Parliamentarians hold our government to account, and governments work constantly in international organisations on our behalf. The United Kingdom should be proud of having the greatest diplomatic service in the world, unrivalled in its traditions and expertise. However, we must demand that those who represent us are as effective as possible on our behalf when they enter the arenas of competing interests in international organisations. As parliamentarians, we can only make this demand when we have a proper understanding of how these organisations work. This review is not only an important resource for colleagues across the House, but also for our diplomats at the Foreign Office and for the government.

Rutland and Melton MP, Alicia Kearns, was pleased to gain the Defence Secretary's reassurance that his Department is focused on combatting the UKs adversaries' proxy and mercenary military groups, such as the Wagner group in Libya acting as a proxy for the Russian state.