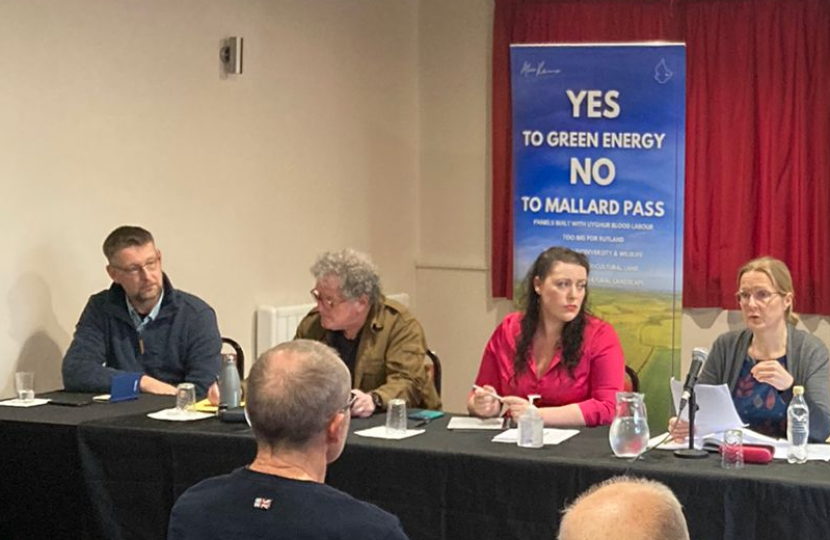 In Essendine on Thursday evening, a packed village hall had the opportunity to ask Alicia Kearns MP, as well as members of the Mallard Pass Action Group, questions about the proposed Mallard Pass solar plant.

The developers themselves, who have repeatedly claimed that they are committed to bringing communities with them, cancelled their appearance at the meeting, having confirmed their attendance last autumn.

Covering a wide range of topics, residents made numerous points about why the 2,175-acre solar plant is not appropriate for Rutland, including:

Following the meeting, Alicia Kearns MP will write to the Department for Business, Energy and Industrial Strategy to lay out the opposition to the proposal among residents of the surrounding villages as well as to the Mallard Pass developers to set out all the concerns raised at the meeting.

The second stage of the consultation will begin in the coming months, giving residents another opportunity to lay out their views on the proposal.

“For a huge solar plant like Mallard Pass, the views of residents have to be taken into account. It’s clear that there are serious concerns among residents about the giant solar plant – from agriculture to the developers’ links to Uyghur forced labour.

“Residents would have to live with the consequences of Mallard Pass for a generation at least – and villages like Essendine would never be the same again.

“I’m pressing the Government to listen to locals, and not grant permission for Mallard Pass to be built.”

“The Action Group is disappointed that Mallard Pass has declined to attend this public meeting with just one week’s notice.

“The residents of Rutland are hugely concerned about this development and wanted the opportunity to raise their questions publicly, so much remains unanswered following the public consultation in December.

“The recent Scoping Opinion response from the Planning Inspectorate highlights the inadequate level of detail provided by Mallard Pass to date, as they have tried to take out of scope so many important aspects of the environmental impact assessment work”