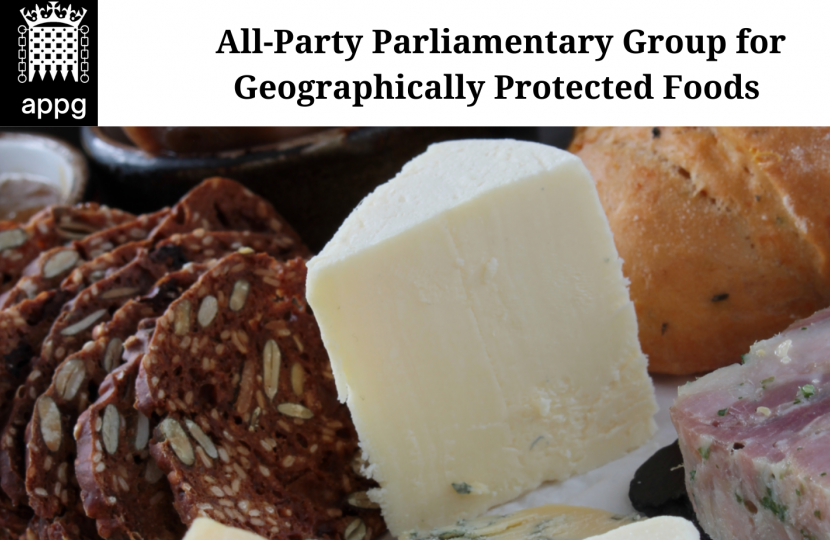 Entitled Untapped Potential: Protected Food and Drink Name Policy in the United Kingdom, the report which makes 38 recommendations to the Government, is the first report in the UK to identify best practices from around the world, uncover how UK GI policy is currently working and set out ways to make the UK’s GI policy even better.

A significant intervention by parliamentarians to deliver improvements on the future of UKGI policy in every nation of the United Kingdom, the 38 recommendations cover three broad areas:
a.    Making GIs work for producers
b.    Expanding the recognition of GIs with consumers
c.    Building a stronger food brand at home and abroad

One of the main conclusions of the report is that more needs to be done to identify new GIs. As such, the APPG plans to launch a national search for Britain’s next Geographically Protected Foods in August. Further details will be announced in August.

Founder and Chair of the All-Party Parliamentary Group on Geographically Protected Food and Drink Alicia Kearns MP, said:
“We have a once-in-a-generation chance to re-define our food and drink policy, to promote our local industries, support the best of our culinary heritage, and further create good paying jobs in the agriculture, food and drink manufacturing sectors.

“As an MP with three Geographical Indications in my constituency, the Melton Mowbray Pork Pie, Rutland Bitter and Stilton Cheese, I have seen first-hand the extraordinary effort, care and indeed love that goes in to making some of the UK’s finest products. Many other countries use geographical indications to put their stamp and their mark of quality on their food and drink exports, and the United Kingdom should too.

“For too long, the United Kingdom has not been seen to punch its weight when it comes to GI and food and drink policy. With this report, we hope to go some way to changing that."

There is so much untapped potential here in the UK when it comes to food and drink. Let’s unleash it.