Conversion Therapy: My Hopes for the Queen's Speech Tomorrow 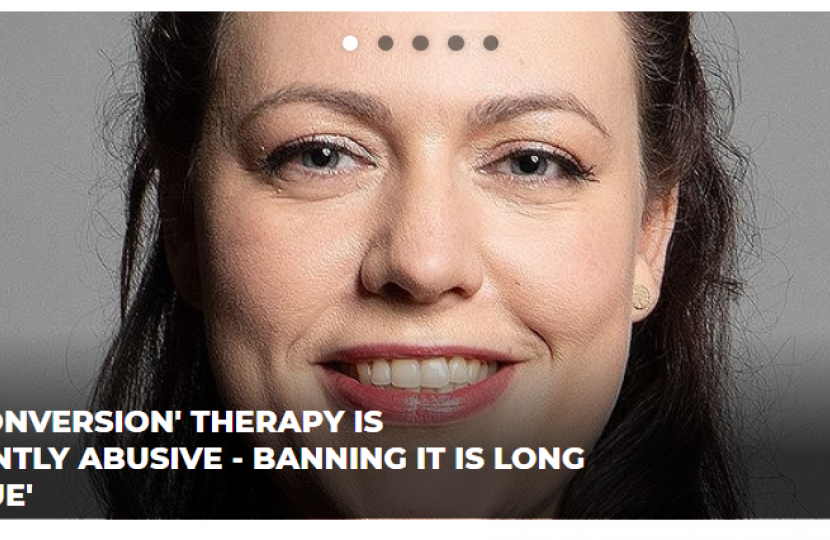 Almost a year ago, I launched my campaign to ban LGBTQ+ so-called conversion therapy in this magazine. Today, I write on the eve of the Queen’s speech hoping that tomorrow the LGBTQ+ community will hear the news we’ve all been waiting for: the Government will bring forward a bill to ban conversion therapy.

I could not have imagined the outpouring of stories I would receive from members of the community and readers of this magazine following my article. Survivors of corrective rape, threats of torture, forced marriage, people made to ingest ‘purifying substances’, undergo exorcisms and whippings, or one-way therapy sessions, and pre-determined group prayer sessions. The enormous heartbreak shared in those stories, and the courage it has taken for people to share their experiences with me, all of which will never leave me. But these survivors spoke out to make sure that no one else goes through the torture they faced, and so that more people aren’t wounded by loved ones taking their lives following the torture of conversion therapy. Even some of my Parliamentary colleagues have shared deeply upsetting personal stories with me.

During the campaign I’ve been focused on delivering a practical plan for how we ban conversion therapy, how we define the practice as it takes so many forms and how we secure the support of those worried that this will infringe on religious liberties, the ability of counsellors to do their jobs, or other freedoms. Conversion therapy is not about having difficult conversations or trying to find a reconciliation between one’s identity and one’s faith or life practices. Conversion therapy is about suppressing and subverting sexuality to such an extent that mental damage is almost inevitable, and physical damage all too frequent. It is, without any scientific or therapeutic evidence whatsoever, and about exorcising an integral part of our self-identity as human beings. It is quackery, and it is fraudulent, and it is inherently abusive.

This ban is all about punishing practices that leave real and enduring psychological and physical scars, and holding accountable those willing to perpetrate (and often profit from) quackery and misery. These protections, and the ability to get justice, is long overdue.

I have been deeply honoured to work with so many committed professionals, religious figures and activists on securing a ban. From the Jayne Ozanne Foundation, the MoU on Conversion Therapy, Stonewall and GLAD, to the Royal College of Psychotherapists, Stephen Fry, religious leaders and the former Archbishop Rowan Williams, and so many more. The campaigning coalition to ban conversion therapy has reflected every part of British society. Together we’ve put forward proposals for how to ban these practices, for how to define conversion therapy, and how to minimise unintended consequences and protect victims.

I’ve also been working to raise awareness that conversion therapy is still taking place in our country. In the last forty years, LGBTQ+ campaigners have come so far in the fight for equality, but somehow too many people were in disbelief that conversion therapy still takes place in our country. The public is now far more aware of this sickening practice thanks to It’s a Sin, an episode of Call the Midwife only last night, debates in Parliament and petitions signed by over 250,000 people across our country to all those survivors and campaigners continually fighting for the ban. No one can pretend this practice doesn’t continue. Indeed only a few weeks ago it was announced that a survivor of conversion therapy, Alan Turing, will be on a British £50 note. It’s been a challenging year, but at the end of it we can say that awareness of this sickening practice is higher than it’s ever been, and that can only be a good thing as we eradicate it from our society.

This last year has shown that the British people, mental health professionals, religious figures and politicians want to see this fraudulent quackery banned, and so does the Government. I can say unequivocally that the Prime Minister and his Government want to deliver a ban on conversion therapy, but the time for action is now. The pandemic has meant that so many laws and campaigns have had to be put on hold. But now that we have a defeat of this virus in sight, tomorrow I hope we will all hear the Queen make the statement we’ve all been waiting for, and a statement which will save lives: love is love, and conversion therapy will rightly, and finally, be outlawed in our country.