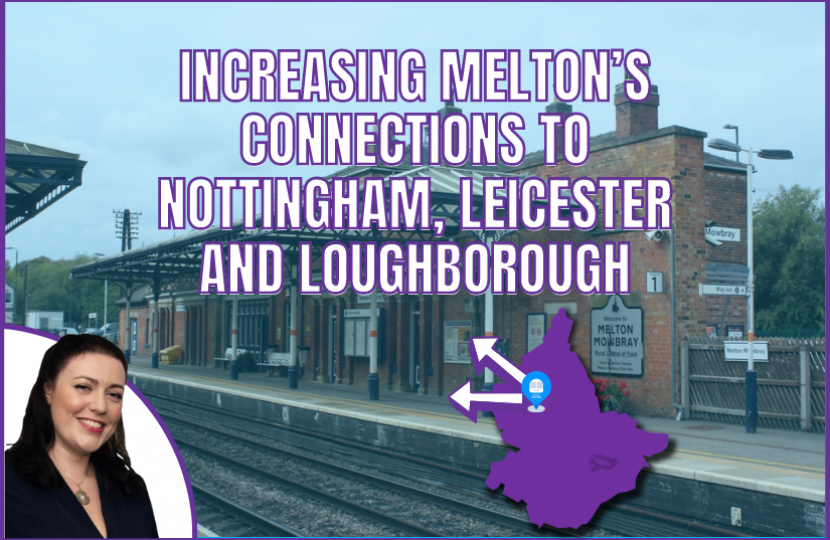 Melton’s MP Alicia Kearns has welcomed the Government’s Spending Review, which has seen her bid to increase train services to Nottingham and Leicester, via Syston and Loughborough from Melton Mowbray move to the next stage of the process.

Ms Kearns submitted a bid to the Department for Transport’s Restore Your Railways Fund in June, and her project has now been allocated £50,000 for further economic and transport studies to develop a business case to deliver a one service per hour train provision on the Syston track.

It is one of only 13 bids to be successful, in this second tranche of the heavily oversubscribed Reversing Beeching Programme.

On top of this, the Spending Review has also re-confirmed that £15 million is being held ready by the Government to deliver the Melton Mowbray Distributor Road Southern Section. This makes clear the Government’s commitment to seeing all parts of the MMDR delivered. The funding can only be released when Leicestershire County Council submits the necessary application, for which the deadline is December 15.

“Meltonians deserve reliable and efficient transport options to travel for work and leisure, and so our wonderful area can welcome more tourists and day-trippers when our country has healed.

“I’ve been raising the need to deliver the Melton Mowbray Distributor Road in full with my colleagues in Government as I know this is a pressing local priority. I’m pleased the Government has today reasserted its support for this important local project and is ready and waiting to give our community the funds we deserve once Leicestershire County Council puts in the application.”

Alicia Kearns was elected on a commitment to improve and invest in local roads and transport. She awaits news on a further bid she has submitted to the Department for Transport’s Restore Your Railway Fund to increase the service on the Poacher Line at Bottesford, but early conversations and local support, are very promising.